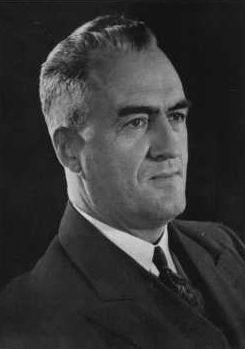 Cornelius Franz "C. F." Klassen: active lay worker in the Mennonite Brethren (MB) Church of Canada after 1928 and an outstanding leader and administrator in Mennonite relief and colonization work in Russia, Canada, and Europe; born 22 July 1894 (3 August 1894 N.S.) in Dolinsk, Neu Samara, Russia, the oldest of 13 children of Franz F. Klassen (30 April 1870, Lichtfelde, Molotschna, South Russia - 21 January 1924, Dolinsk, Neu Samara, Russia) and Justine (Wiebe) Klassen (30 August 1874, Landskrone, Molotschna, South Russia - 26 June 1933, Winnipeg, Manitoba, Canada). Cornelius married Maria Brieger Reimer (7 June 1891, Riga, Latvia - 6 December 1976, Abbotsford, British Columbia, Canada) on 11 September 1926 in Moscow, Russia. She was the daughter of Louis Brieger and Clara (Goeschel) Brieger, and was a Lutheran of Baltic German descent. At the time of their marriage, Maria had a son from a previous marriage that had dissolved due to her first husband's departure from her life. Cornelius and Maria had a family of five children: Harold, Walfried, Herbert, Justina, who died in childhood, and Irmgard. Cornelius Klassen died in Gronau, Nordrhein-Westfalen, Germany on 8 May 1954, and was buried at Leutesdorf near Neuwied, Germany.

His early schooling was in the village school at Donskaya, Neu-Samara, where the family lived from 1900 on; his father operated a store there until 1918. He also attended the Zentralschule at Karassan, Crimea from 1907 until 1910. After his baptism into the MB Church at Lugovsk in the summer of 1911, he entered the office of the Otto Deutz Co. of Moscow in 1912. He studied in Education under A. Tcheriyayev in St. Petersburg (1913-1914) and then served a year as private tutor. His plan to study medicine was blocked by induction into the Mennonite forestry service as a Conscientious Objector (1915-1917).

Klassen first served as a representative of the Mennonite community in 1917 as a delegate to the Allgemeiner Mennonitischer Kongress (All-Mennonite Congress) at Ohrloff. He also represented the Mennonite forestry service men at the Bundeskonferenz at Halbstadt. Klassen demonstrated his outstanding gifts of diplomacy and determination when he and Peter Froese were sent by the Congress to negotiate the release of Mennonites held in prison in Moscow by the Kerensky government. After serving as elected representative of the settlement of New Samara and Orenburg both at Moscow and to the Bashkir Republic at Sterlitamak (1918-19), Klassen, together with Froese, was chosen again at Ufa in 1920 to represent the Mennonites of East Russia and Siberia in Moscow. He worked in Moscow in 1920-21 with the United Council of Religious Bodies and the Russian Relief Committee, and he aided Alvin J. Miller in the negotiations with the Kremlin. These negotiations laid the foundation for the American Mennonite Relief (AMR) of the Mennonite Central Committee (MCC) in Russia. He was active in the AMR program from 1921 until 1923. He then shared in the organization of the AMLV (Allrussischer Mennonitischer Landwirtschaftlicher Verein; All-Russian Mennonite Agricultural Union) in 1923. Klassen was vice-president of the AMLV, while Peter Froese served as president. The AMLV rendered valuable service both in the great emigration of 1922-1925 to Canada, and in taking over the representation of the Mennonites of Russia after the church conference organization was suppressed by Moscow.

In 1928 Cornelius and his family left Russia, arriving in Winnipeg in December of that year. He entered the service of the Canadian Pacific Railway (CPR) in 1930 and provided leadership in the great effort to pay off the entire transportation debt (Reiseschuld) accumulated by the emigrants of 1922-1925; the transportation of these emigrants from Russia to Canada had been financed by over $1,000,000 in loans from the CPR. Klassen also worked very closely with David Toews of Rosthern in the work of the Canadian Mennonite Board of Colonization. He helped to organize the Mennonite Central Relief Committee of Western Canada in 1940 and served as its first secretary-treasurer. He served on the board of trustees of the Gretna (Manitoba) Mennonite Collegiate Institute and the Mennonite Brethren Bible College in Winnipeg. Beginning in 1936, Klassen was a member of the Committee for General Welfare and Public Relations of the MB General Conference, and in 1941 he began as secretary of the Military Problems Committee of the Mennonite Churches of Western Canada. With David Toews he served as Canadian delegate to the Mennonite World Conference sessions at Danzig (1930) and Amsterdam (1936). He was also a delegate and speaker at the succeeding world conferences at Goshen-Newton (1948) and Basel (1952). Beginning in 1944, he was a member of the Mennonite Central Committee, and a member of its Executive Committee from 1946.

Klassen's greatest work was as European Commissioner for Refugee Aid and Resettlement under the MCC in Europe from December 1945 until his death. During the last year of his service he was also the general director of MCC work in Europe. He was the MCC representative on the important Liaison Committee with the German Mennonites, as well as on the Board of Trustees of the Europäische Mennonitische Bibelschule (European Mennonite Bible School) at Basel. He handled with outstanding success the arduous and difficult assignment of negotiating with various governmental and international agencies (UNO, IRO, etc.) for the exit permits, transportation, and migration for over 10,000 Russian (plus several thousand Galician and Danzig) Mennonite refugees to Canada, Paraguay, and Uruguay. He was the father and administrator of the resettlement housing program in Niederbiber, Espelkamp, Backnang, Enkenbach, and Wedel for Danzig Mennonite refugees in Germany, and a prime figure in the establishment of the service of old people's homes at Leutesdorf (where he is buried), Enkenbach, and Pinneberg. During the difficult postwar period in Europe, particularly in Germany, he acted as counselor and helper in the revival of Mennonite church life and in the establishment of such institutions as the Foyer Mennonite at Valdoie-Belfort, France, the Basel Glaubenskonferenz, and Der Mennonit, of which he served as editor during the last year before his death.

Throughout his service he remained a devout, simple Christian of deep faith and dedication, an inspiration to thousands, both young and old, in both Europe and America. Through his tireless labors and extensive speaking tours on behalf of relief efforts, he became not only the symbol of Mennonite relief and refugee service to Mennonites in general but a strong influence for better mutual understanding and co-operation among Mennonites across denominational lines. This also found expression in his participation in the work of the Mennonite Encyclopedia, of which he served as an associate editor from the beginning of the project until his death.

Klassen's residence in Canada was in Winnipeg until 1948 when the family moved to Abbotsford, British Columbia.