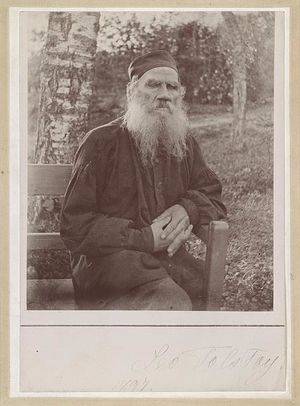 Count Lev Nikolayevich Tolstoy (Russian: Лев Николаевич Толстой),was born on 9 September 1828 on the family estate Yasnaya Polyana, Tula governorate (province), Russian Empire and died 20 November 1910 at Astapovo, Ryazan governorate. He is usually referred to in English as Leo Tolstoy and was an aristocrat, a writer, a religious pacifist, and a kind of social anarchist. His world-wide legacy is in his realistic fiction where he is regarded as one of the greatest authors of all time. His two longest works, War and Peace, written in 1865–69, and Anna Karenina written in 1875–77, are commonly regarded as among the finest novels ever written. Tolstoy began keeping a diary in 1847 and kept recording his detailed diaries throughout his life making him one of the most copiously documented writers who ever lived.

Tolstoy lost his parents to death early and was raised by relatives yet he describes his early life as idyllic. As a young man he led a rather wasteful life and served for a time as an artillery officer in the Crimean War. After writing Anna Karenina he fell into a state of existential despair. To Tolstoy all activity now seemed utterly pointless in the face of death. Tolstoy, impressed by the faith of the Russian peasant people then turned to Christianity, first to the Russian Orthodox Church, but then he decided all Christian Churches were corrupt institutions that had thoroughly falsified true Christianity. He rejected the Old Testament, composed his own "corrected" version of the Gospels, denied the divinity of Christ and focused his faith on the Sermon on the Mount with the emphases on a profound non-resistance to evil.

Tolstoy tried for the rest of his life to live by his interpretation of Christianity. He expressed his faith and understanding of Christianity in his subsequent writing in particular two books: What I Believe (also known as My Religion) (1884) and The Kingdom of God Is Within You (1894). In these works he expounds on his faith particularly on absolute non-resistance and forbidding violence of any kind, opposition to the swearing of oaths, evils of government control and interference, evils of private ownership and of wealth, and the righteousness of hard work and simple living. Also in these works he reviews the non-resistance to evil expressed in the teachings of other Christians mentioning Mennonites among Quakers, Doukhobors, Hutterites, and Molokans, and makes comments on the writings of others advocating for non-resistance. The only Mennonite work he notes is a small 74-page book by the Reformed Mennonite Bishop Daniel Musser (1809-1877), Non-resistance Asserted, or, The Kingdom of Christ and the Kingdom of this World Separated, (Lancaster, Pa., Elias Barr & Co. 1864), without seeming to know that it was by a Mennonite. In Russia for his changed lifestyle and religious writings Tolstoy endured excommunication from the Russian Orthodox Church, his religious writings were banned and he was ostracised.

There is little evidence that Mennonites in the Russian Empire had any interaction with Tolstoy apart from reading his fiction, for most Russian Mennonites looked west to central Europe for inspiration. Russian Mennonites would have found Tolstoy's rationalism, unorthodox Christianity and anti-materialism objectionable. Also Tolstoy focused his interests to those Slavic groups in Russia that were opposed to participating in violence and war and took little notice of Russian Mennonites.

American Mennonites, however, showed an interest in Tolstoy's pacifism while he was still alive for in May 1896 John F. Funk wrote and printed two articles on Tolstoy in his Herald of Truth newspaper. In the December 1903 issue of Goshen College Record, the college's president, Noah E. Byers, published an essay on Tolstoy. By this time these publication show that educated American Mennonites knew of Tolstoy's non-resistance beliefs, which they accepted and also of his writings on socialism, on Christ, and his methods for the bettering of the human condition which they criticized.

Tolstoy is a towering figure for Christians to commit to live non-violent lives and to seek social justice. He was also a powerful influence on participants of all faiths to lead non-violent protests. This worldwide force of Tolstoy for non-violence is recognized and praised by Mennonites in the twentieth century. Tolstoy is also lauded for his condemnation of churches for their support of oppression and violence. His opposition to oaths, his desire for people to be free from government, to be non-dependent on wealth, and the importance of hard work and simple living resonated with many contemporary Mennonites. However, Mennonites hold a view of the separation of church and state, in which the state affirmed by God, though outside the perfection of Christ, uses force and violence to preserve order and punish evil, but those in the church, only use love and forgiveness and never coercion or violence in their interaction with all others. This conflicted with Tolstoy's view that man is by nature good, and when he links the Biblical Kingdom of God with human society where coercion and violence is not needed. Many Mennonites regarded Tolstoy's vision as anarchy, likely derived philosophically from German idealism.

The religious writings and moral life of Tolstoy continue to be read by Mennonites and they inspire many. John Howard Yoder (1927-1997) in his writings on pacifism praises Tolstoy, and Clarence Bauman (1928-1995) in his work, The Sermon on the Mount (Macron, Mercer Univ. Press, 1985), was much influenced by Tolstoy. In that work Bauman writes: “Tolstoy alone represents light and truth” (p.406). An important interpreter of Anabaptism, Robert Friedmann (1891-1970) was led to Anabaptism by having his spiritual life awakened by Tolstoy. In his writings Friedmann often describes his Anabaptist Christianity in terms similar to those of Tolstoy.