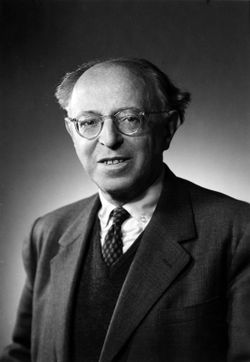 Robert Friedmann was a major interpreter of Swiss-South German and Austrian Anabaptism from the 1920s to 1970. He also wrote a major work on the effect of classic Pietism upon South German and Swiss Mennonites up to the 19th century.

Born 9 June 1891 in Vienna into a liberal Jewish family, Friedmann studied in various fields, including engineering and the various natural sciences. The disillusionment following the First World War deeply affected Friedmann, and he reentered the university (Vienna) in 1920 as a student of history and philosophy (DPhil, 1924). His scholarly work in Anabaptism began in 1923 when he prepared a seminar paper on the contents of three Hutterian codices, which "gripped [him] profoundly." Friedmann's first publications on Anabaptist themes came in 1927; his scholarly efforts led to a host of publications in Anabaptist studies over the next four decades. He was assistant editor of the Mennonite Encyclopedia I-IV, 1947-59, responsible for the former Austrian-Hungarian territories, and for the Hutterian Brethren--himself writing more than 200 articles. He was also a perennial contributor to Mennonite Quarterly Review, Church History and Archiv für Reformationsgeschichte.

In 1939 Friedmann was imprisoned in Vienna for 12 days along with Jews and others of Jewish background, then freed by friends who counseled him to emigrate immediately. He went, first to England, then to Yale Divinity School through the efforts of Roland Bainton, and then to Goshen, Indiana through the efforts of Harold S. Bender. For several years he helped organize the Goshen College Mennonite Historical Library. He became a baptized member of the Eighth Street Mennonite Church (General Conference Mennonite Church) during this time. In 1945 he accepted a position in history and philosophy at Western Michigan University (Kalamazoo) which he held to the time of his retirement, working closely with the Goshen Anabaptist research center throughout this time.

Friedmann is perhaps best known for his view of Anabaptism as being "existential Christianity" (see his Theology of Anabaptism, 1973). His influence upon Harold Bender's classic synthesis of Anabaptism, "The Anabaptist Vision" (1944), has been documented (see Leonard Gross, "Recasting the Anabaptist Vision: the Longer View," Mennonite Quarterly Review 60 [1986], 352-363). He also published many articles on the Hutterites, appreciating this tradition deeply. In 1961, as a 70th-birthday tribute, a volume was published honoring Friedmann's lifelong scholarship pertaining to the Hutterites: Hutterite studies, essays by Robert Friedmann, ed., Harold S. Bender.

An important book-length manuscript written in 1954, but first published in 2017 was Friedmann's "Design for living," which defined the nature of life in a manner that is at the same time to a great extent the sum and substance of the Anabaptist view of discipleship, but described in philosophical terms.