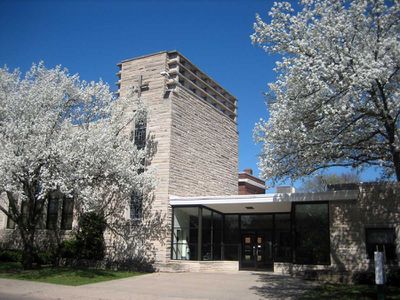 Another cluster of Silver Street members lived to the west, in the town of Goshen. When Silver Street called a new pastor, Alvin K. Ropp, in 1911, he and his family purchased a home in Goshen and he soon floated the idea of starting a church in the town, a church that would become Eighth Street.

In 1913 a group of 20 persons, mostly Goshen residents, organized a new “city” church. They purchased a house on Fifth Street to use as a temporary worship space. In 1919, the congregation purchased property at the corner of Eighth and Purl Street and began construction of a sizable church building which was dedicated in 1920.

The tensions in the Indiana-Michigan Conference were complex and included the legacy of a 1917 merger of Amish Mennonite and Mennonite congregations with different traditions of authority and decision-making; external societal and governmental pressures stemming from World War I; a wider context of fundamentalism being debated among Protestants everywhere in the USA at the time; and cultural change among rural Mennonites who moved to town, pursued formal education, and shed some ethnic folkways, all of which unsettled an older generation. Tensions emerged in a number of congregations, but Goshen’s College Mennonite Church soon found itself in an especially tight situation both because its members were generally on the progressive end of the spectrum, and because some of its members were employed at Goshen College, which was increasingly under scrutiny from the Mennonite Board of Education.

Between 1918 and 1923 Goshen College had four presidents, none able to please both the board, on the one hand, and the faculty, on the other. From 1920 to 1922 the acting president was I. R. Detweiler, who had been a missionary in India and was concurrently pastor at College Church. When Detweiler was replaced as college president in 1922 because he was deemed insufficiently conservative, especially on matters of plain dress, he also resigned as College Church pastor and a number of College Church members quietly transferred their memberships to Eighth Street. Indiana-Michigan Conference leaders resisted such transfers, and those who joined Eighth Street did so by affirmation of faith since they did not receive a “church letter” from their former congregation blessing their move.

The next year, in 1923, Mennonite Board of Education closed Goshen College for a year and dismissed most of the faculty. About the same time, Eighth Street’s church board hired I. R. Detweiler, the former college president, to be its pastor. Detweiler’s coming to Eighth Street brought leadership stability – Eighth Street had had a series of short-term and interim pastors for the past six years – and Detweiler also attracted even more disaffected Mennonites to Eighth Street, including those alienated by the recent closing and reorganization of the college. Membership grew to 251 by 1928.

The Mennonite progressives at Eighth Street saw religion as an important contribution to civic moral uplift, and endorsed causes from labor reform and world peace to Prohibition. In 1933 Eighth Street began sponsoring a Boy Scout troop, with about a third of the boys coming from families associated with the congregation. Nationally, the scouting movement reflected progressive commitments that combined values of public service, ecumenical Christianity, and at least a mild form of patriotism.

Frank S. Ebersole (1875-1965), an active lay leader at Eighth Street who served for many years as chair of the congregation, personified the progressive impulse. Ebersole managed the Goshen Milk Condensing Company (later Dairy Farmers of America, on 9th Street), and was also a member of the Goshen school board, the Goshen Rotary Club, and the Goshen Board of Public Works and Safety. A Republican, Ebersole was elected mayor of Goshen and served a four-year term, 1943-1947.

Eighth Street’s progressive Mennonitism was a factor in its spawning two institutions that served Elkhart County more broadly: Oaklawn mental health center and Greencroft retirement center. Pastor Robert W. Hartzler was deeply involved in launching these facilities, and served as executive director of Oaklawn from 1962 to 1978 and of Greencroft from 1966 to 1981.

Eighth Street members were also instrumental in starting Camp Friedenswald, near Cassopolis, Michigan, in 1950, and the congregation has remained a strong supporter of the camp and provided significant board and staff leadership through the years.

In 1973, members Sandy Wingard and Jane Brookmyer began Eighth Street Preschool, which in 2020 remained an important ministry and service to the community. By that year, a total of more than 2,500 children had been enrolled there.

In the 1957 the sanctuary was remodeled and a fellowship hall and education wing were added. Again, in 2000 there was extensive remodeling of the sanctuary.

The group was largely urban, of diverse geographical background. The minister in 1954 was Robert W. Hartzler. The church carried on an active program with regular meetings of Sunday school, young people’s organization, six women's organizations, weekly morning and evening services, a choir, and other activities. The observance of footwashing was optional; an organ was used in worship; discipline was practiced to a limited extent.