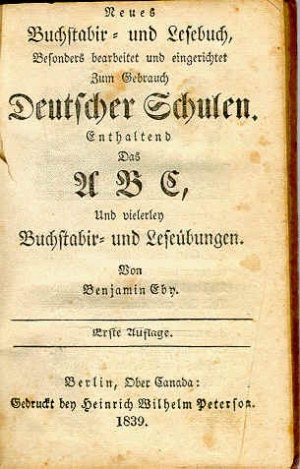 Funk began the publication of materials for Sunday-school work in May 1873 as a 4-page supplement to the Herald of truth called the Herald series of Sunday school lessons, but due to opposition ceased publication at the end of the season. In 1880 the Lancaster Mennonite Conference authorized the preparation of Sunday-school Question books, modeled after the American Sunday School Union books. A committee composed of ministers Amos Herr and Jacob N. Brubacher of the Lancaster Conference and Funk, assisted by the Lancaster bishops Isaac Eby and Benjamin Herr, produced the manuscript for the primary and intermediate booklets in 1880, and publication proceeded at once by Funk at Elkhart, followed by the Infant lesson book and in early 1881 by the fourth in the series, the adult or Bible class question book. German editions of all four appeared in 1881-82. J. H. Oberholtzer published at Milford Square, Pa., in 1859, Das Unparteiische Biblische Fragenbuch. Zum Gebrauch in Sonntagschulen und Familien für Kinder-Unterricht.

The publication of Sunday-school quarterlies (quarterly lesson help booklets giving the text of the International Series of Sunday-school lessons with editorial helps and commentary by Mennonite writers) was begun by Funk in 1890, with J. S. Coffman as editor, with a German edition also beginning the same year. It was an adult quarterly. Funk never published a primary or a teachers' quarterly. When Funk sold out his periodicals to the Mennonite Publishing House in 1908, the quarterly ceased publication, and was replaced by a new title with the same function.

Funk also published Sunday-school "papers," as they were called, weekly 4-page periodicals largely distributed to the children in the Sunday schools without charge, paid for out of the Sunday-school treasury, as were the quarterlies. In 1878 he took over the Words of cheer started by H. A. Mumaw in 1876 as a children's Sunday-school paper. In 1881 he took over the analogous German paper Der Christliche Jugendfreund, designed for a slightly older age group, started by S. D. Guengerich of Johnson County, Iowa, in 1878. In 1887 he started a small 4-page weekly tract paper designed largely for Sunday schools, called Welcome tidings (1887-97), also a German edition, Angenehme Stunden (1887-93). Neither of these prospered, and both were absorbed into other publications.

Beginning in 1906 the Sunday-school material of Mennonites (MC) consisted of picture rolls and cards and a primary lesson quarterly published by the Gospel Witness Publishing Company at Scottdale, which in 1908 was merged into the Mennonite Publishing House. In 1907 the Advanced quarterly and an Advanced teachers' quarterly were added. These, based on the international uniform lesson outlines, were published continuously until 1924. The editor of all three for the first years was D. H. Bender. In 1925-36 the uniform lesson materials were increased from three quarterlies to five by the addition of the Junior-Intermediate quarterly and the Junior teachers' quarterly. The Primary quarterly was revised and improved and the picture rolls and cards continued. 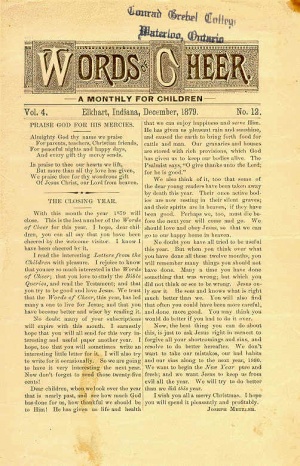 The Herald Graded Sunday School Series was in preparation in 1958. In this series Kindergarten I began use in 1951; Nursery was introduced in 1957, and Kindergarten II in 1958. Group graded courses from primary through intermediate were being developed in co-operation with the General Conference Mennonites.

Weekly Sunday-school papers used to supplement the lesson materials were Words of cheer since 1876, Beams of light since 1906, and Youth's Christian companion since 1920. -- Harold S. Bender, Clayton F. Yake

The General Conference Mennonite Church started its Sunday-school quarterlies in 1887 with the German Sonntagschul-Lektionen für Jung und Alt which has been in continuous publication to 1958, S. F. Sprunger editor to 1920, followed by C. H. A. van der Smissen. The English Sunday school Bible lesson quarterly, N. C. Hirschy editor, appeared for only 6 years, 1900-06. In 1937 four new English quarterlies were established, the Mennonite adult quarterly, the Mennonite young people's quarterly, the Mennonite junior quarterly, and the Mennonite junior teacher, which were replaced by a new series in the fall of 1958, entitled Adult Bible study guide, Youth Bible study guide, Junior Bible study guide, and Junior Bible study guide teacher's manual. At the same time the old German quarterly was renamed Bibel Studien für Erwachsene. All these used the International Uniform Lessons, and all were published by the Board of Education and Publication, Newton, Kansas. The Board also published its own imprint edition of the Scottdale Herald teacher. It began publishing jointly with the Herald Press (MC) at Scottdale a new graded series of Sunday-school lessons for various ages of children. It has its own imprint editions of the Herald Press, Nursery, home and church series, Bible lessons for kindergarten children. Year II, and Herald intermediate Bible studies. Two General Conference Mennonite Sunday-school papers were published in 1958, the German Kinderbote (since 1886), first edited by David Goerz, and the English Junior messenger (since 1939). These were both 4-page papers. The Kinderbote was at first a monthly, but became now bimonthly. The Messenger was weekly.

The only other Mennonite group publishing its own Sunday-school quarterlies in 1958 was the Mennonite Brethren, which has had the German Lektionsheft since 1904 and the English Adult quarterly since 1958. Graded Sunday school lessons were briefly issued in English (1940-47, senior, intermediate, and primary in one quarterly), and in 1939 for the German, as Ganze Bibel Gradiierte Lektionen. The Teachers manual for Sunday school lessons was published 1949-57 (separate quarterlies for primary and junior departments). All these were published by the Mennonite Brethren Publishing House at Hillsboro, Kan., and served both the United States and Canada. On the lower level the United States churches have been using the Scripture Press (Wheaton, Ill.) materials, and the Canadian churches have either translated these into German or produced some of their own.

In 1958 the smaller Mennonite groups used either the Herald Press materials--e.g., Church of God in Christ, Mennonite, and Evangelical Mennonite (Kleine Gemeinde), the former using the General Conference Mennonite German quarterly since Scottdale dropped the German number -- or material from such publishers as the Union Gospel Press (Cleveland, Ohio), Gospel Light Press (California), and the Scripture Press. The Mennonite Brethren in Christ (now Missionary Church) have been publishing their own rather complete Bethel Series since 1910.

An important development in Mennonite Sunday-school literature is the project for joint publication by the Herald Press (MC) and the General Conference Mennonite Board of Education and Publication of a comprehensive graded lesson series. The Canadian Mennonite Brethren Conference also planned to use this series. -- Harold S. Bender and Willard Claassen

The major event in Mennonite Christian education curriculum since 1958 was the development of the Foundation Series for children, youth, and adults as a cooperative project of five peace churches. Brethren in Christ, the General Conference Mennonite Church (GCM), and the Mennonite Church (MC) were publishing partners for all three units. The Church of the Brethren was a publishing partner for youth and adult and a cooperative user for children's material. The Mennonite Brethren Church was a cooperative user for the youth and adult series. (See Sunday School Literature (1958) for earlier history.)

The Foundation Series replaced the series introduced in 1960 by the Mennonite Church (MC) as the Herald Graded Sunday School Series and by the General Conference Mennonite Church as the Living Faith Graded Sunday School Series. While using the same basic materials for these two curricula, each publisher revised the material to fit its needs. The Foundation Series advanced the level of cooperation by producing the same edition for all users. The children's curriculum, for which Paul M. Lederach was executive director, was introduced in 1977, and a revision was completed in 1986. Helmut Harder served as director for the adult and youth curriculum.

Use of the Foundation Series for children was extended to German-speaking churches by the Conference of Mennonites in South America, who translated the material for congregations in Brazil, Paraguay, and Uruguay. Beginning in 1980, the Hispanic Anabaptist-Mennonite Churches of the Western Hemisphere, with help from the Council of International Ministries, developed a Spanish-language curriculum for adults, based in part on the Foundation Series for Adults (Currículo Anabautista de Educación Basilica Congregaciónal). Hector Valencia and Marta Quiroga de Alvarez served as editorial directors. In 1985, work was begun to develop a four-year curriculum for children using the basic concepts of the Foundation Series for children. Leticia Stucky served as its coordinator. Executive director for both projects was Arnaldo Casas.

Since 1964, the Church of God in Christ, Mennonite (Holdeman) has published its own Sunday school series. Through Gospel Publishers, Moundridge, Kansas, they provide lessons for five age groups, preschool to adult, using their own outlines to cover the Bible in four years. Some of these lessons are translated into Spanish for mission congregations in South America. The Holdeman church had earlier used materials from Rod and Staff Publishers, Crockett, Kentucky (founded in 1958), whose outlines cover the Bible in seven years with lessons for five age groups as well as story papers. Christian Light Publications, Harrisonburg, Virginia, founded in 1969, also publishes a full range of lessons based on the Uniform Lesson (International Sunday School Lessons) outlines. -- Maynard Shelly