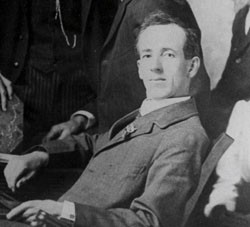 Noah Calvin Hirschy: first president (1900-1908) of Central Mennonite College (in 1913 named "Bluffton College"); born 25 February 1867 near Berne, Indiana. He was married to Augusta Hunsberger of Wadsworth, Ohio, on 5 September 1895. They were the parents of two children: Lois and Hermon (died 11 March 1925). From 1885 to 1891 he alternately taught country school and attended normal school. During the year 1891-1892 he served as principal of the public schools at Berne.

In 1892 Hirschy received a call to become minister of the Wadsworth, Ohio, congregation (General Conference Mennonite). There he had opportunity to continue his studies at Oberlin College and Seminary, completing his collegiate course in 1897 and the theological course in 1898. From 1898 to 1901 he was principal of the Wadsworth Academy.

On 6 May 1894 he was ordained to the eldership by Ephraim Hunsberger, his future father-in-law. In 1896 Hirschy was chosen a member of the Home Mission Committee of the General Conference. In 1898 he was elected moderator of the Middle District Conference.

During these early years of his ministry N. C. Hirschy was one of the leaders in the movement to establish a conference school. In 1894 he prepared a paper to be read at the Middle District Conference meeting at Bethel, Missouri, which was said to be "the first public plea on record for a new college in the Middle District." In 1896-1897 he was appointed to committees commissioned to draft plans for a conference college. He delivered the principal address at the laying of the cornerstone of the first building of Central Mennonite College on 19 June 1900. After several entreaties he accepted the presidency in 1900 but did not take up residence at Bluffton until 1901. He guided the college through the troublous initial years, resigning in 1908 to accept the presidency of Redfield College, Redfield, South Dakota. In 1906 he received his master's degree from the University of Chicago and in 1907 his doctorate of philosophy from the University of Bern in Switzerland. He served as president of Redfield College for five years (1908-1913), following which he was financial secretary of Windom College, Montevideo, Minnesota (1913-1914), and principal of public schools, Winnie, Texas (1914-1916). In 1920 he joined the faculty of Berea College, Berea, Kentucky, serving as head of the botany department until his death at Berea, Kentucky, on 13 March 1925.

Krehbiel, Henry Peter. The History of the General Conference of the Mennonites of North America. [Canton, Ohio] : Published by the author, 1898‑1938.