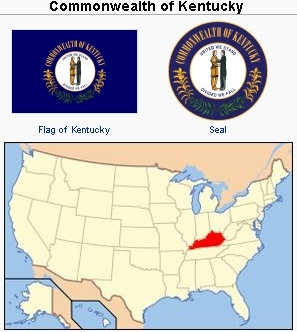 Kentucky is located in the East Central United States of America and is usually listed as one of the southern states. West Virginia lies to the east, Virginia to the southeast, Tennessee to the south, Missouri to the west, Illinois and Indiana to the northwest, and Ohio to the north and northeast. The total area of Kentucky is 40,409 square miles (104,659 km²) and the population in 2008 was estimated to be 4,269,245. In 2005, 91.27% of Kentucky's population was Caucasian and 7.98% was African American. In 2000, the following denominations had the highest percentage of adherents amongst Kentuckians: Southern Baptist Convention (24.25%); Roman Catholic (10.05%); and United Methodist Church (5.16%). Kentucky was originally a part of Virginia, but in 1792 it became the 15th state to join the Union.

Until 1943 Mennonites bypassed this state, very likely because the chief routes of Mennonite westward migration lay north of the Ohio River. In 1957 there were eleven Mennonite missions and churches in the state with a total membership of 143. Seven of these were churches and missions of the Mennonite Church (MC) with a membership of 90, and three of the Conservative Mennonite Church, with a membership of 53. These churches were located in two areas of the state. Morgantown, with a membership of seven, was located in the west central part of the state, and was sponsored by the Berea Mennonite Church (MC) of Montgomery, IN. The other nine stations were located in the eastern part of the state. Teges and Wildcat, with 25 and 37 members respectively, situated south of Booneville, were sponsored by the Pike Mennonite Church (MC), Elida, Ohio. Approximately 15 miles (25 km) northeast were the three Conservative Mennonite stations named Turners Creek, Bowlings Creek, and Gays Creek, with memberships of 25, 8, and 11. Northeast of these stations, and near Highway 15, southeast of Jackson were the two mission stations Caney Creek and Talcum, the latter with four members. The first was sponsored by the Indiana-Michigan Mennonite District Mission Board (MC) and the latter by the Clinton Frame Mennonite Church (MC), Goshen, IN. Approximately 30 miles northeast of Jackson were two Mennonite missions sponsored by the Virginia Mennonite Board of Missions and Charities (MC). These were Crockett and Relief, with seven and eleven members. The first of the ten missions was Relief, established in 1943. It was followed by Turners Creek in 1946, Bowlings Creek in 1947, and Wildcat and Crockett in 1949. The later stations were begun in 1950-1952. Big Branch, near Talcum, was added in 1956.  --  Melvin Gingerich

Other Mennonite-sponsored institutions in the state were: one church camp at Clayhole owned by the Rosedale Mennonite Missions; one elementary school at Crockett (grades 1-8) with 3 teachers and 40 students (1987-88), sponsored by the Faith Hills Fellowship congregation; and 5 voluntary service units (3 sponsored by Mennonite Central Committee, 1 by the Evangelical Mennonite Church Board of Missions, and one by the Conservative Mennonite Board of Missions). There were two church planting efforts at Lexington and Louisville by the Conservative Mennonite Conference (MC) and one by the Virginia Mennonite Conference (MC) at West Liberty.

As of 1985 there were seven Old Order Amish settlements in Kentucky with a total of nine congregations. The oldest settlement was founded in 1958 in Todd County. Other settlements with single congregations were located in Casey, Christian Crittenden, Barren, and Harrison Counties. -- Reynold Sawatzky