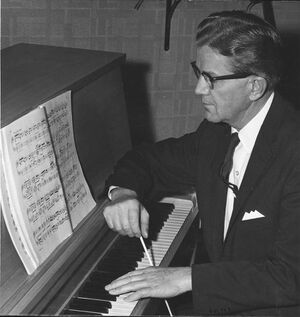 David Harry Suderman: professor, choral conductor, and administrator was born near Hillsboro, Kansas, USA on 4 March 1909 to Peter Suderman (26 August 1870-1 May 1947) and Carolina Hein Suderman (18 February 1877-30 September 1958). David was the sixth child and second son in a family of five sons and five daughters. The Sudermans were members of the Ebenfeld Mennonite Brethren Church.

David attended Tabor Academy for two years and Tabor College for two years. He began his teaching career in a rural school before starting college. He graduated from Bethel College with a music major in 1935. He went on to receive his master's degree in 1936 in music education from George Peabody College, Nashville, Tennessee. He taught at Bethel College from 1936-1976. His work at Bethel was interrupted when he was drafted during World War II when he became a Civilian Public Service camp director and Rocky Mountain regional director. After the war, he continued his education and received his doctorate in music education from George Peabody College in 1947.

At Bethel College, Suderman chaired the humanities and then the fine arts divisions. He played a major role in developing the general education curriculum and taught the humanities course when it was first developed in the 1950s. Suderman spent several sabbaticals and summers in special programs and workshops enhancing his education and teaching skills. He also represented Bethel at North Central Association of Colleges and Schools workshops. In 1953 he received a Ford Foundation grant and studied at Leland Stanford University and attended the Robert Shaw Chorale School. His second sabbatical was a year teaching at Appalachian State Teachers College in 1961.

David Suderman became a Fulbright Choral Lecturer in Colombia for two years in 1965-66. This began a long and fruitful interest in South America. He took the Bethel madrigals to Colombia in 1968, 1971, 1973. He also took the Bethel choir to Vienna, Austria, in 1975. His Bethel choral groups also performed throughout North America and Kansas. His own performing career at Bethel included over 150 programs, mostly in churches, as a member of the male quartet.

Suderman visited the Mennonite communities in Paraguay several times following his retirement from Bethel. He began the music program at the Centro Evangélica Mennonita de Teología Asunción (CEMTA) in the 1970s. A decade earlier he had been the founding director of Kansas Mennonite Men's Chorus. He directed church choirs throughout his career, including the Christian Church, Newton; First Mennonite Church, Newton; Alexanderwohl Mennonite Church, Goessel; and the First Presbyterian Church, Newton. He also directed the Golden Singers, a seniors choir. Suderman judged high school music contests throughout his career. In late 1981 one of his last official church assignments was with the Commission on Overseas Mission in Cuauhtémoc, Mexico.

Suderman was also a prolific speaker and author. He delivered many chapel and convocation presentations at Bethel College as well as speaking at congregations and conferences. He organized and spoke at numerous music workshops. His dissertation on “The Music Program in Church-Related Liberal Arts Colleges” was published. He also wrote and published numerous papers and articles.

One of Suderman’s post-retirement roles for one year after leaving Bethel College in 1976 was as the executive for higher education for the Commission on Education of the General Conference Mennonite Church. In addition to visiting the General Conference schools (secondary and college) in Canada and the United States, he also spoke in numerous congregations and prepared several reports and papers on the status of Mennonite higher education.