The founding of Newton's earliest Mennonite church was a story of migrants whose roots were in the Heubuden church of West Prussia (Poland). From the 1850s to the 1890s, nationalistic, militaristic, economic, and religious issues were widespread in Europe. With Mennonites impacted, over 300 people left the Heubuden congregation and migrated to Kansas and Nebraska between 1876 and 1892.

In 1877, a portion of the Heubuden Mennonites migrated to the Newton area in Harvey County. Some settled in Newton. Many farmed east of town, creating the settlement of Goldschaar. At its heart were the families of Hermann Sudermann, Sr., Hermann Sudermann, Jr., and Wilhelm Quiring.

The group assembled for their Sunday services at the home of Hermann Sudermann, Sr. The church had ministers but no elder. Ministers dealt with the preaching but an elder was needed for communion, baptizing, and catechism.

The Peter Claassen family was among the 1878 immigrants. Claassen led the Newton area group in formally organizing as a congregation. Growth led to services being moved to Newton at a rented Baptist church. Halstead Mennonite's Christian Krehbiel, Sr. and Emmaus Mennonite's Leonhard Sudermann served as visiting elders. 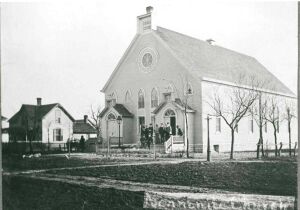 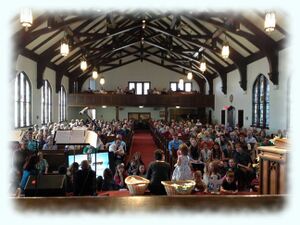 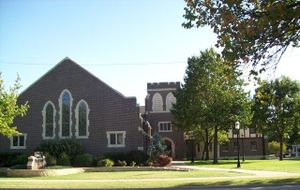 First Mennonite Church (Mennonite Church USA), Newton, Kansas, had its beginnings in 1877, when a few Mennonite families immigrating from South Russia settled east of Newton. Among them were Herman Sudermann, Senior, Herman Sudermann, Junior, and William Quiring. In 1878 with the coming of Peter Claassen, a minister from Prussia, the church secured its charter and joined the Western District Conference of the General Conference Mennonite Church. Services were held in a rented Baptist church until their new building was dedicated in 1881 on East First Street. In 1897 and 1902 the church was enlarged, and in 1932 replaced by a new brick church seating 700.

Its first Sunday school was organized in 1881, its first choir in 1888 or 1889, Christian Endeavor in 1898, Junior Endeavor in 1920, Mission Sewing Society in 1887, and Mission Study Circle in 1933. By 1956, from this church had come thirteen ministers, eighteen missionaries, and five deaconesses. Ministers who had served the congregation to 1955 included Peter Claassen, Bernhard Regier, Senior, Abr. Suderman, Jacob Toews, J. R. Toews, B. Regier, J. E. Entz, Abram Warkentin, and D. J. Unruh (August 1944-early 1955). In 1956, First Mennonite's membership was 811, it was served by Arnold Epp as pastor. In 1955 a group withdrew to form the Newton Bible Church.