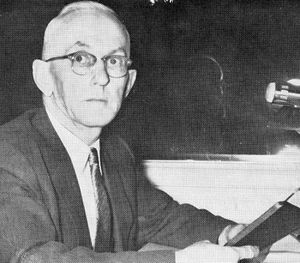 Heinrich Regehr: teacher and radio Bible instructor; born on 3 July 1898 in Annovka, Crimea, South Russia, to Jacob A. and Katharina (Unruh) Regehr. He was the youngest of ten children from his father’s two marriages. On 29 October 1902, he married Katharina Siemens, daughter of Johann and Maria (Born) Siemens, in Krasnopol, Russia. The couple had seven children, all of whom survived childhood. He died on 23 November 1991 in Abbotsford, British Columbia.

Heinrich spent his early childhood near the town where he was born and began his education there, but before he finished elementary school, his family moved to Siberia. His family consisted of four children from his father’s first marriage, three from his mother’s first marriage, and three from their joint marriage. Heinrich completed his basic education and at age 16, he began to work as a teacher, continuing in this profession until his work was interrupted by the First World War three years later.

On 19 November 1922, Heinrich married Katharina Siemens, daughter of Johann and Maria (Born) Siemens, in Krasnopol, Asiatic Russia. For the first three years of their marriage, Heinrich and Katharina continued to live in the area; however, they soon decided to emigrate from Russia, together with many other Mennonites. The couple already had one child when they left their home in 1925, and another was born before they arrived in Canada in 1926. They first spent several months in Mexico before moving on to Canada and settling in Saskatchewan, where the family grew to include seven children.

During his first two years in Canada, Regehr worked on a farm near Herbert, Saskatchewan, and for the next fifteen years, he taught at the Herbert Bible School. In 1943 Heinrich and his family moved to Vancouver, British Columbia to take a break from his teaching. While here he served as leading minister of the Vancouver Mennonite Brethren Church. Once he had recuperated, Heinrich moved with his family to Gretna, Manitoba, to teach Bible courses at the Mennonite Collegiate Institute.

The next move for Regehr and his family was to Winnipeg, where he taught classes in Bible and theology at the Mennonite Brethren Collegiate Institute and at the Mennonite Brethren Bible College. During his teaching years, Heinrich also served as conference secretary for the Canadian Conference of Mennonite Brethren Churches for a number of years throughout the 1930s, 1940s, and 1950s. Following his time in education, he spent the next 17 years until his retirement working in broadcasting for Mennonite Brethren Communications (later renamed Family Life Network) as a Bible teacher on the radio program Licht des Evangeliums. Heinrich and Katharina next moved to British Columbia, where they settled in Clearbook. Heinrich died there in his sleep on 23 November 1991 at the age of 93.

Heinrich Regehr was a dedicated teacher and radio instructor who used his teaching skills to help his students and others deepen their knowledge of the Bible and their relationships with God. Through his work at the two high schools and the Bible college, as well as in his radio broadcasting work, he assisted many people in gaining a better understanding of their faith and helped to strengthen the church and the community. Despite the many changes in his life as he moved from his home country to Mexico and then to various regions of Canada, he had a positive influence on many people wherever he went.