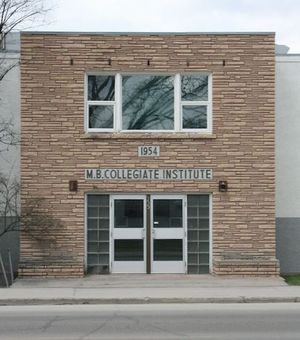 The Mennonite Brethren Collegiate Institute, a church high school, was established in September 1945 in Winnipeg, Manitoba. In the early years, the school met in a few rooms in the building of the Mennonite Brethren Bible College. In these years, Mennonite Brethren parents in Winnipeg had a growing concern about the influence of public schools on their children. They wanted a school that would meet the requirements of the Manitoba curriculum, but also pass on their faith and language to the next generation.

Enrolment was 44 students in the first year. As numbers rose, the school moved into a duplex at 173 Talbot Ave. This site experienced several renovations and additions, including new classrooms and labs in 1947, and a gymnasium in 1951. Subsequent building projects were carried out in 1959, 1972, 1987, and 2004.