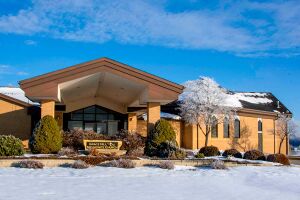 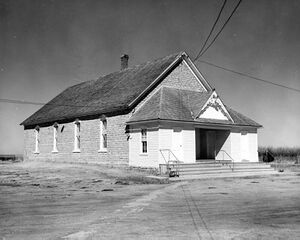 Grace Hill Mennonite Church originated with individuals who came from the Frisian Mennonite congregations of Montau at Graudenz, Schoensee near Culm, and Obernessau near Thorn in what is today the Vistula River valley in Poland in about the middle of the 18th century. Around 1780-1785, several Mennonite families from that area founded the settlement of Michalin near Berditchev (in present-day Ukraine). They settled on the estate of a Polish nobleman, Potocky, in an area which was formerly in Poland but had become a part of Russia and thus was referred to as Polish Russia.

In 1811, several ministers, including Hans Harms and David Siebrandt, arrived at the colony from South Russia. Several young people were baptized, the Lord’s Supper was held, and ministers were elected. Thus, Grace Hill Mennonite Church dates its founding to 1811.

Migration of the Michalin group to the United States took place under the leadership of Johann Schroeder in three waves, two late in 1874 and the third in 1878. The main group arrived at Peabody, Kansas, on 5 December 1874. Soon after, they bought land in Pleasant Township where the church is now located. Church services were first held in the school building of District 38, a half-mile east of the present church. The following year, 1875, the congregation incorporated under the name of Gnadenberg Mennonite Church. The name of the church was changed from Gnadenberg to Grace Hill at a special business meeting on 5 October 1953.

The first church building was begun in 1880 and dedicated on 23 April 1882. At the annual church business meeting on 28 December 1951, the congregation voted to construct a new church building. The congregation held a groundbreaking service on 5 April 1953, and a cornerstone-laying service on 18 October 1953. They dedicated the new building on 1 August 1954. On 14 May 1970, the church voted to build an educational wing, groundbreaking for which occurred on 3 January 1971, and in 1976, the congregation added more space for Sunday School classes by installing fold-dividers to the Fellowship Hall. More recently, on 12 December 1999, the church agreed to a major building project that included a new sanctuary, kitchen, restrooms, foyer, and Sunday School space. A groundbreaking service for the new sanctuary was held on 25 June 2000, and a transition service moving from the old sanctuary to the new one happened on 2 September 2001. The congregation dedicated its new facilities on 25 November 2001.

Gnadenberg was a charter member of the Kansas Conference when it was organized in 1877 and took part in the conference sessions of the General Conference at Halstead in 1881. In 2021 Grace Hill was a member of the Western District Conference and Mennonite Church USA.

Gnadenberg Mennonite Church (or Grace Hill Mennonite Church), which is located 8.5 miles east and one mile south of Newton, Kansas, was founded as a congregation in 1811, near the city of Berditchev, in the province of Kiev, Polish Russia, and was known as the Michalin church and settlement, organized under the leadership of David Siebrandt. In the great movement to America the Michalin congregation also chose to emigrate, and arrived in three groups—two late in 1874, and the third in 1878. In 1875 the group was incorporated under the name Gnadenberg. Their church, dedicated in 1882, was still in use in 1953, with the distinction of being the oldest Mennonite church building in continuous use west of the Mississippi River. It was replaced by a new church dedicated in August 1954.