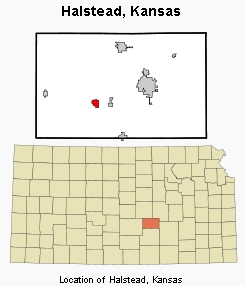 Halstead, Harvey County, Kansas, a town (population of 1,300 in 1955; 1,873 in 2000; coordinates: 38° 0′ 3.73″ N, 97° 30′ 29.66″ W) located in the central part of the state, was founded in 1872. Of the 500 Mennonites in the vicinity in 1954 about 20 percent lived in Halstead. Christian Krehbiel of Summerfield, Illinois, accompanying Mennonites from Russia in 1873, liked the land in the Halstead area. A delegation of the Summerfield Mennonite Church was then appointed to investigate the land for possible settlement. The delegation was joined by David Goerz, Bernhard Warkentin, and others, making a total of twelve. As a result a Mr. Touzalin of the Atchison, Topeka, and Santa Fe Railway came to Summerfield, and arrangements were made to reserve land for settlement near Halstead. In 1874 a group was sent to make the final selection of the land which was chosen between Halstead and Moundridge. The town to be established was named Christian.

Warkentin built a mill on the Arkansas River at Halstead and also conducted an agricultural experimental station, particularly to promote and select the hard Red Turkey Wheat which he imported from the Ukraine. In 1876 David Goerz established in Halstead the Western Publishing Company, where he published Zur Heimath. In 1882 the Halstead Seminary, which became the nucleus of Bethel College, was established. Peter Wiebe founded a lumber business in 1874. Numerous other Mennonite families of the Summerfield Mennonite Church settled in and around Halstead founding the Halstead First Mennonite Church on 28 March 1875. The Grace Mennonite Church (Church of God in Christ), a mile west of town, was founded in 1880. The first Mennonite relief agency, the Mennonite Board of Guardians (Fürsorgekomittee), of which David Goerz was secretary, had its headquarters in Halstead. For a while it seemed that Halstead would become the center of the Mennonite settlements in Kansas. Gradually, however, Newton won in popularity. Warkentin and Goerz moved their major interests to Newton. Later the town became noted for the Halstead Hospital and its founder, Dr. A. E. Hertzler, who was of Mennonite descent.