Goshen College, Goshen, Indiana, founded in 1903, was a continuation of the Elkhart Institute. To induce the school to move to Goshen, the city pledged ten thousand dollars, provided the Board would name the institution "Goshen College" and purchase certain plots in the southern part of the city for a campus. Building operations began in a wheat field at the end of South Eighth Street in June 1903. East Hall, the first campus  building, completed in September, served as women's dormitory, dining hall, and lecture rooms until the completion of the administration building in January 1904.

N. E. Byers (M.A. Harvard, 1903), principal of the Elkhart Institute (1898-1903), continued as president of the new Goshen College and C. Henry Smith as librarian and instructor in history, English, and debating, and later as the first dean of the College. Byers served not only as chief administrative officer but also at first as academic dean, registrar, personnel dean, and religious counselor.

Until 1905 the governing body of the College was a self-perpetuating board, but in 1905 ownership of the property was transferred to the Mennonite Board of Education, whose members are the elected representatives of the district conferences, Mennonite Church General Conference, and the alumni associations of the Board's schools. The Board was incorporated in Indiana on 27 January 1906.

When the school moved to Goshen in 1903 the curriculum included junior college, academy, normal school, Bible school, school of business, school of music, school of oratory, summer school, and Bible correspondence department. The college enrollment was less than 20, academy about 60, and the total enrollment in all departments 210. The four-year college course was offered for the first time in 1909 and the first A.B. degree graduates completed the course in 1910. By 1913 college students outnumbered those in the academy, but in 1922 college enrollment was only four times as large as that of the academy. The latter was discontinued after  1933 as an organized department. 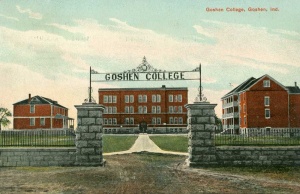 In 1913 President N. E. Byers (1903-1913), Dean C. Henry Smith, and Professor B. D. Smucker resigned to accept positions in the newly reorganized Bluffton College. J. E. Hartzler was elected president to succeed Byers, serving from 1913 to 1918. Seconded by J. S. Hartzler, the new president embarked on a program of expansion by purchasing and equipping a farm for agricultural courses and building Science Hall. In January 1918, a heavy debt having accumulated, both J. E. Hartzler and J. S. Hartzler resigned because of the financial difficulties of the school. George J. Lapp, missionary on furlough from India, succeeded J. E. Hartzler as president from 1918 to 1919 and the college property was mortgaged to satisfy the creditors. I. R. Detweiler, assisted by G. L. Bender, collected more than $120,000 to meet the more immediate obligations of the Board and the College. In 1919 H. F. Reist succeeded Lapp and early in 1920 secured the accreditation of the College by the State of Indiana. When Reist's health failed in February 1920 the Board elected Detweiler acting president, who served 1920-1922. By this time the College was recovering from the effects of World War I, student enrollment was increasing, the financial condition of the College was improving, the curriculum was being expanded, and extracurricular activities reached a high peak of student interest. But the College was still laboring under the burden imposed by various critical charges leveled at the College administrators in the earlier years, and I. R. Detweiler, the acting president, failed to gain the necessary confidence.

When the Board in 1922 elected Daniel Kauffman president, many students and a few faculty members left the institution. At the end of the year 1922-1923 the Board, fearing that the next year's student body would be very small and wishing to take time for reorganization, closed the College for one year.

In 1923 the Board elected its president, S. C. Yoder, to serve as president of the College, and he continued in the office from 1923 to 1940. The College reopened in September 1924 with Noah Oyer, former dean of Hesston College, as dean, C. L. Graber business manager, and a faculty including only three former faculty members of the institution. Dean Noah Oyer rebuilt the prestige of the College and determined to carry out the Board's earlier directive to build up a strong liberal arts college and a central graduate Bible school. After Oyer's untimely death in 1931 H. S. Bender was elected acting dean and in 1932 as dean. He and Silas Hertzler, registrar and director of teacher training, continued efforts toward accreditation. But always there loomed the apparent impossibility of raising the necessary $500,000 endowment, a prerequisite to admission into the North Central Association (NCA). Finally as a result of the depression of the early 1930s when endowments no longer were a reliable guarantee of steady income and the N.C.A. made stable income instead of an absolute endowment figure the norm for N.C.A. membership, Dean Bender began a campaign for admission into the North Central Association with the strong support of President Yoder and the faculty.

Other achievements of President Yoder's administration were a gradual winning of the confidence of the constituency, resulting in growth of the student body and in contributions for college expenses and a building program—a large program for that day. With the help of Mennonite Educational Finance, Inc., the Mennonite Board of Education erected John S. Coffman Hall (1929), a dormitory for men; rebuilt Kulp Hall (1930), and erected the Health Center (1939) and the Memorial Library (1940). When President Yoder resigned, he was succeeded in June 1940 by Ernest E. Miller, who served until August 1954.

The College furnished significant leadership to other peace colleges in postwar rehabilitation and. relief efforts. The president helped to organize the Council of Mennonite and Affiliated Colleges and served for four years as its first president. He also furnished leadership and support in the foreign student exchange program, both in bringing foreign students to study in Mennonite colleges in America and in arranging for Mennonite students to study and travel abroad.

Very significant in this period was the expansion of the curriculum. The years after 1944 witnessed the development of a graduate Biblical Seminary, an accredited School of Nursing, and the accreditation of the program of teacher education by the American Association of Colleges of Teacher Education (AACTE). The faculty increased greatly both in number and quality of advanced training. The personnel services of the College were rated superior by the AACTE examiners in 1954. With the growth of the College a system of counseling was developed that furnished intimate personal guidance to the student in campus adjustments, curricular problems, and religious life. A strong campus religious program was developed with emphasis on the Mennonite heritage.

Equally outstanding as its work in the professional field as a Mennonite educational institution was the leadership that the College rendered during the second quarter of the 20th century in serving the church through research, publication, and the promotion of various types of conferences, such as nonconformity, evangelism, Christian life, foreign missions, and peace. Members of the faculty reorganized the Mennonite Historical Society in 1925 and founded the Mennonite Quarterly Review in 1927, recognized among scholars as one of the outstanding religious historical magazines in the United States. The Society published a series of monographs under the general title Studies in Anabaptist and Mennonite History. It was also active in building a Mennonite Historical Library of over 12,000 volumes (in 1954) and a serials list of over 200 current publications. Members of the faculty received recognition in the councils of the Mennonite Church (MC), where they were asked to accept positions of major influence and responsibility. A spirit of evangelical Christianity and Christian discipleship on the campus grew in fervor and intensity in the mid-20th century.

Over 10,200 students had matriculated in Goshen College and the Elkhart Institute since the founding of the latter in 1894 until 1954. Because Goshen for many years was the only accredited four-year liberal arts college in the Mennonite Church (MC), students registered from every section of the United States and Canada and from many foreign countries. Alumni of the College and the seminary have served in many walks of life and in most of the major areas of the world, their principal fields of service being teaching, preaching, church work, relief work, nursing, medicine, and rural life.

Of the 59 members of the instructional staff in 1954, 26 had a doctor's degree. Of the others only three had less than a master's degree. Eleven had been instructors in the College for more than 25 years, four for 30 years or more. In addition to doctoral dissertations ten members of the faculty had produced 30 major books and numerous pamphlets besides contributing scholarly articles to a variety of magazines in the fields of history, religion, and folklore. Twenty-nine faculty members had studied, lived, or traveled in foreign countries and had been engaged in foreign relief, rehabilitation, and missionary service for periods of one to three years. Dean Carl Kreider was on a four-year leave of absence as dean of the college of liberal arts of International Christian University in Japan.

In a statement adopted on 5 May 1949 the faculty presented its "Concept of Christian Education." This pronouncement said in part:

The guiding principle in determining the values which the faculty considers worth striving for in personal and group living is the concept that the essence of Christianity, as set forth in the Scriptures, is discipleship, the transforming of the whole life after Christ. This Christian discipleship is to be expressed in human relations, in the use of time, energy, material resources, and in devotion to the church and its mission. . . .

The whole of life is lived in the context of commitment to the will of God; and therefore, every activity, whether work, recreation, social fellowship, prayer, or meditation, has spiritual significance. The highest expression of faith in Christ, who is the way, the truth, and the life, will be found in loving, sacrificial service to one's fellow men. . . . The entire program of Goshen College is planned to help students to know Christ as Saviour and Lord and to become effective witnesses for Him. . . .

The contribution and influence of Goshen College and the Biblical Seminary not only in the field of Mennonite higher education in America, not only in its own direct constituency in the Mennonite Church (MC) but in the Mennonite community as a whole, has been oustanding in character and far-reaching in effect. It has been without doubt a major influence in directing the course of the life and service of the Mennonite Church into progressive evangelical channels. By its conservative course, its clear theological line, and its staunch Mennonitism, it has done much to mold the thought and action of the Mennonite community. It has aided in a strong revival of the historical Anabaptist heritage, and in a strengthening of the nonresistant peace witness. It has been a strong center of missionary spirit and has furnished a large number of the missionaries of the church, as well as leaders in all fields of the church's ministry. 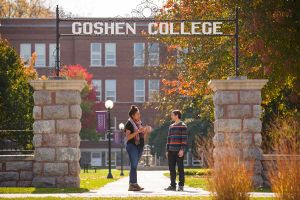 In 2018 Goshen College offered 43 majors and 49 minors in its undergraduate program. Its adult degree programs were on-site and online courses upgrading a Registered Nursing (RN) degree to a Bachelor of Science in Nursing (BSN), as well as an on-site Bachelor of Science in Social Work. Graduate degrees included a MA in Environmental Education, MS in Nursing (Family Nurse Practitioner track), Master of Business Administration (MBA), and a Doctorate of Nursing Practice.