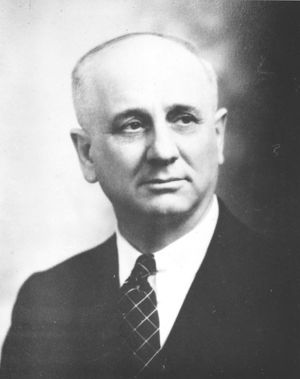 C. Henry Smith, an outstanding American Mennonite historian, was born 8 June 1875, at Metamora, Illinois, one of the eight children of Bishop John and Magdalene Schertz Smith, his grandfathers Schertz and Smith having emigrated from Alsace-Lorraine ca. 1829. He married Laura Ioder 26 December 1908; there were no children. Smith died in 1948.

Henry was educated at Illinois State Normal University, 1896-1898, University of Illinois (B.A., 1903), and the University of Chicago (B.A., 1903, Ph.D., 1907), the first known American Mennonite to secure the Ph.D. degree and continue in the church. His chosen career of teaching included three years of elementary school near home (1893-1896), Elkhart Institute 1898-1900, Goshen College 1903-1905 (also librarian) and 1908-1913 (first dean of the college 1909-1913), and Bluffton College 1913-1948. His major field was history, in which he did outstanding work at the University of Chicago (Phi Beta Kappa), and which he taught well for almost 50 years. He taught for one year (1922-1923) at Bethel College. He also entered the banking business, serving for years as president of the Citizens National Bank of Bluffton and vice-president of the First National Bank of Pandora. With ample private means he could devote himself to research and writing in his special field of interest, Mennonite history. In his church he was a member of the Board of Publication of the General Conference Mennonite Church 1940-1948, and in the district conference a member of the Peace Committee.

Smith's interest in Mennonite history continued throughout his life. His doctoral dissertation (1907) was Mennonites of America, published by the author in 1909. His outstanding work was The Story of the Mennonites (Berne, 1941), an enlargement of his earlier work The Mennonites: A Brief History of Their Origin and Later Development in both Europe and America (Berne, 1920). Two other larger monographs came from his pen: The Coming of the Russian Mennonites: An Episode in the Settling of the Last Frontier 1874-1884 (Berne, 1927), and The Mennonite Immigration to Pennsylvania in the Eighteenth Century (Part XXXIII of A Narrative and Critical History of the Pennsylvania German Society, Norristown, Pennsylvania, 1929). He shared in the writing of The Story of Bluffton College (Bluffton, 1925, edited by E. J. Hirschler and C. Henry Smith). Smaller sketches and booklets include: Mennonites in History, an address delivered in Philadelphia (Scottdale, 1907); Menno Simons, Apostle of the Nonresistant Life (Berne, 1936); Christian Peace: Four Hundred Years of Mennonite Peace Principles and Practice (Newton, 1938); One Hundred Years Ago, an address delivered at the first Home-Coming celebration of the old Partridge congregation near Metamora in 1940; Mennonites in America (Akron, 1942, number II in the series Mennonites and Their Heritage, published by the Mennonite Central Committee for use in CPS camps); and Metamora (Bluffton, 1947). His autobiographical book, The Education of a Mennonite Country Boy, was written in 1925, but published in 1943 at Bluffton in 15 mimeographed copies. He wrote some 15 articles for the Mennonitisches Lexikon and a similar number for the Mennonite Encyclopedia. He was a central figure in the planning of the Encyclopedia, serving as co-editor until his death, and in this connection was first president of the Mennonite Research Fellowship. He wrote numerous articles in some 16 Mennonite periodicals and yearbooks. A complete bibliography appears in Mennonite Quarterly Review XXIII (1949), "A Bibliography of the Writings of C. Henry Smith" by N. P. Springer.

His work will remain a challenge to complete objectivity, to scrupulous fairness and justice, and to effective and winning presentation of insights gained. Mennonites owe to him a great debt for his pioneer and creative work, particularly in the field of American Mennonite history. He was a valiant fighter, not only for historical truth, but for the best in the Mennonite heritage, particularly the testimony for peace and nonresistance. With malice toward none, and charity toward all, he hoped for and worked toward a better understanding and eventual reunion of the divided Mennonite brotherhood. As a historian, Smith was unquestionably the greatest of the historians produced by the Mennonites of America and the peer of any of the European Mennonite historians. With his five major works, written over a period of thirty-five years, he published more full-length historical works than any other Mennonite historian. His particular gift was that of synthesis of masses of material into well-written, interesting, integrated accounts. He was pre-eminently the general Mennonite historian who took the great sweep of our history in both Europe and America and put it into clear, easily read volumes that will remain standard works for years to come.

C. Henry Smith was a member of the Mennonite Church (MC) until his withdrawal to Bluffton, when he joined the General Conference Mennonite Church. The initial "C" has been erroneously assumed to stand for "Christian." It was simply an initial adopted by Henry himself.