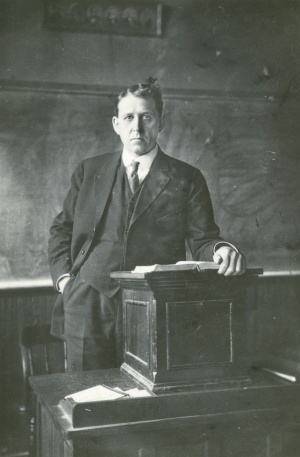 John Ellsworth Hartzler was a Mennonite progressive, whose career as preacher, college administrator and theology professor exemplifies the informal continuum linking the early 20th century Swiss-American Mennonite traditions, running from Old Order Amish on the traditionalist end through the Mennonite Church (MC) to the General Conference Mennonite Church on the progressive end. His several books and many articles reflect his changing outlook.

Born 2 February 1879 near Ligonier, IN, to Old Order Amish parents, Joseph and Mary (Beyler) Hartzler, J. E. grew up in Cass County, Missouri, USA). He attended the more progressive, Mennonite and English-speaking Bethel congregation. Revival meetings by John S. Coffman sparked a youthful ambition to preach. In 1895 Hartzler experienced conversion under revival preaching of A. D. Wenger. Hartzler was ordained in the Bethel congregation in 1904 by Bishop Andrew Shenk, after Bishop Daniel Kauffman had directed the election process. Hartzler quickly became a popular and colorful preacher throughout the Mennonite Church (MC). He remained a confidant of Daniel Kauffman until the relationship soured after 1918 due to financial mismanagement at Goshen College and Hartzler's development of a more liberal theology. Hartzler's chapters on the "Plan of Salvation" in Kauffman's Bible Doctrine (1914), was omitted from the revised edition (1929).

He served as pastor at Prairie Street Mennonite Church (Elkhart, IN 1910-1913) and dean (1911-1913) and president (1913-1918) of Goshen College. He married Mamie M. Yoder in 1910. In 1918 he became a professor of Bible at Bethel College (Kansas, USA) and served as president, 1920-1921. As an early advocate of an all-Mennonite seminary, Hartzler became president of Witmarsum Theological Seminary when it opened in 1921 at Bluffton College (Ohio). At Witmarsum, Hartzler and others incurred frequent charges of modernism. Hartzler defended his loyalty to the essence of Mennonite faith, but a faith defined more in terms of individual rights than Anabaptist tradition.

After Witmarsum closed in 1931 Hartzler taught one year at American University in Beirut and two years at Near East School of Religion. In 1936 he joined the faculty at Hartford Theological Seminary, serving 11 years. After his formal retirement, Hartzler continued a busy schedule of lecturing and preaching. Mamie Yoder Hartzler died in 1955. J. E. Hartzler's final years, spent at Goshen with his wife, Mrs. Myra H. Weaver, whom he married in 1957, proved to be a time of quiet reflection, a renewal of relationships with Goshen College, and a fruitful relationship with the younger generation of leaders within the church. He died 24 May 1963.

Warkentin, A. and Melvin Gingerich, compilers. Who's Who Among the Mennonites. North Newton, KS: Bethel College, 1943: 99.