The Evangelical Mennonite Brethren Conference was organized 14 October 1889, under the name Conference of United Mennonite Brethren in North America (Konference der Vereinigten Mennoniten-Brueder von Nord America), the first session being held at Mountain Lake, Minnesota. In 1914 this name was changed to The Defenceless Mennonite Brethren in Christ of North America. In 1937 the name was changed to Evangelical Mennonite Brethren (EMB). For a time many of the congregations used the name "Brudertaler," probably under the influence of the Mountain Lake founding church, and the Conference was popularly called the "Brudertaler" Conference. The Ebenezer Church at Henderson, Nebraska (separating from the Bethesda Mennonite Church), under the leadership of Elder Isaac Peters, and the Brudertaler Church at Mountain Lake, led by Elder Aaron Wall, were the first churches organ­ized. Wall's following was about one third of the Mountain Lake Mennonite community; the other part organized to form two churches, Bergfeld and Bethel. The churches from which Peters and Wall separated later joined the General Conference Men­nonite Church. The ground given by Peters and Wall for separation was the need of (1) the new birth and changed life as a requirement for baptism and church membership;  (2) a separated walk as a result of the new birth; (3) a more rigid church discipline. The form of baptism is now optional with each congregation, though earlier it was pouring only. 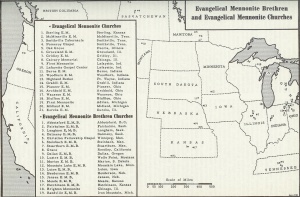 The Conference, although at no time attaining a phenomenal growth, reported steady progress. Families moving into new settlement areas became the charter members of newly organized churches. Soon a dozen churches dotted several states and provinces. Some of these churches have since ceased to exist, largely because of repeated crop failures during periods of continued drought. G. P. Schultz was the outstanding evangelist. H. P. Schultz, John N. Wall, and John R. Dick served the Conference as chairmen more than any other. The Conference in 1954 numbered 21 organized churches with a total membership of 2,309, and 3 mission stations not as yet member churches with a total attendance of about 65. There were 64 ordained ministers, includ­ing missionaries (men) and educators, and 12 men were licensed to preach.

In the mid-1950s an increasing number of Conference young peo­ple were attending schools of higher education in preparation to serve as missionaries, ministers, doc­tors, nurses, educators, and in other lay professions. Churches of the Conference co-operated with the following schools: Dalmeny (Saskatchewan) Bible Acad­emy, Lustre (Montana) Bible Academy, Meade (Kansas) Bible Academy, Mountain Lake (Minnesota) Bible School, Steinbach (Manitoba) Bible Academy, and Grace Bible Institute, Omaha (Nebraska). The Henderson (Nebraska) Bible School and the Dallas (Oregon) Bible School, once operated by the EMB churches at these places, had been discontinued.

Revival and evangelistic meetings were held al­most annually in all of the churches. Bible conferences, Bible camps, vacation Bible schools, and child evangelism were encouraged in all constituent areas.

Missions were encouraged from the inception of the Conference. The P. A. Friesens were the first EMB missionaries to India (1906), serving under the M.C. Board; the G. T. Thiessens went to China in 1914; and the A. F. Wienses were the first home missionaries, going to Chicago in 1906. In the mid-1950s the conference had 60 missionaries on the foreign fields, 9 on extended furlough or retired, and 10 candidates. About 45 missionaries served on the home fields. The Conference was affiliated with the following mission organizations: China Men­nonite Mission Society, Congo Inland Mission, Gos­pel Missionary Union, and the Far Eastern Gospel Crusade. Missionaries were also channeled through eight non-affiliated mission organizations.

Several auxiliary organizations were planned. Plans were announced at the 1949 conference to organize a Young People's Society. Its purpose was to stimulate interest in the conference on the part of its young people. An organization meeting was held at the 1950 conference, and it was decided to call the organization "The Ember Youth Fellowship" because "this name implies youth aglow and it is our desire to be aglow for the Lord." The acrostic implication of the name was evident. The organization was an outgrowth of the Sowers of Seed Fellowship which had been organized in 1940. The Ember Youth Fellowship arranged a four-day program for its members at the annual conference. In 1962 a retirement plan for ministers and missionaries was developed. By 1983 it had 74 participants plus 16 retired persons receiving monthly payments for the rest of their lives. The Women's Missionary Society was established in 1943. In 1986 the name was changed to the "Evangelical Mennonite Brethren Women's Ministries." There were 164 members of the conference serving as missionaries under 41 mission societies in 1986. With few exceptions these missionary organizations were non-Mennonite; the conference is represented on some of their boards. The constitution of 1960 held to the Anabaptist Mennonite position on nonresistance and warfare. The constitution of 1983 allows individuals to make their position on warfare a matter of personal conscience.

A 25-year debate on conference identity was settled on 16 July 1987, when the conference (by a 74-percent vote) changed its name to the Fellowship of Evangelical Bible Churches. In 1987 the conference consisted of 36 congregations with a total membership of 4,538, of which 3,539 were resident members. Of this total, membership in Canada (20 congregations) was 1,981; in Argentina, 62; and in Paraguay, 361. --  Arnold C. Schultz

In 2013 the following congregations were members of the Fellowship of Evangelical Bible Churches:

Glaubens-Bekenntnis der Mennoniten in York und Hamilton Co., Nebraska, Nord Amerika. Elkhart, 1899; actually a slightly revised (by Isaac Peters) form of the G. Wiebe Prussian Confession of 1792, and reprinted at Elkhart in 1907 with the change in the title of Glaubens-Bekenntnis der Men­noniten in Nebraska und Kansas, Nord-Amerika, found both times with Katechismus oder Kurze und einfache Unterweisung . . . , was apparently not a conference publication. But in 1923 an official publication appeared containing the Constitution and Discipline and a newly prepared Confession of Faith. The cumulated conference reports 1901-38 were published in a booklet in 1938.