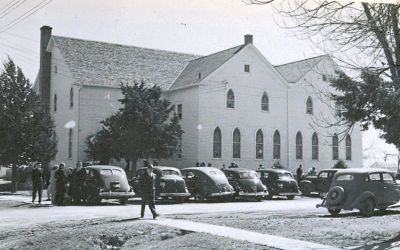 Two ministers, Heinrich Epp and Benjamin Ratzlaff, came with the first group. Ratzlaff died 30 October 1874. In the spring of 1875 two other ministers, Isaac Peters and Gerhard Epp, arrived. Isaac Peters had been elder of the Mennonite congregation at Pordenau, Molotschna settlement, Russia, from 1867 until 1874, when he immigrated to America with the smaller portion of the Pordenau congregation. Insisting upon stricter requirements for a separated life as an evidence of regeneration than the majority of the membership were willing to agree to, he withdrew in 1880 with a considerable number of members to form the Ebenezer Mennonite Church, which (with the Aaron Wall group at Mountain Lake, Minnesota) became one of the two founding congregations of the Evangelical Mennonite Brethren Conference.

Originally feetwashing was practiced at the communion service, but was discontinued in 1939. The first reed organ was used about 1915; a pipe organ was installed in 1968. Discipline for transgression was still required by confession in the 1950s. The Sunday-school enrollment in 1953 was 1105. Young people's meetings, prayer meetings, mission societies, and choirs were organized in the church. German services were discontinued in the early 1940s. Ministers who have served the church are listed in Additional Information.