In 1926 Peter immigrated to Canada with his parents and siblings, settling in Coaldale, Alberta. He was baptized on 22 July 1928 joining the Coaldale Mennonite Brethren Church. He served this church as choir director and German school instructor, and was involved in youth and pulpit ministry 1935-1945. Peter Dick studied at Mennonite Brethren Bible College in Winnipeg 1945-1949. He was ordained as a minister at the North Kildonan Mennonite Brethren Church in Spring 1949. 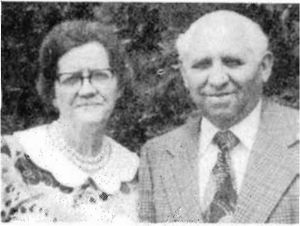 After his retirement from teaching, Peter and Lydia Dick accepted a two-year assignment in South America with the Mennonite Brethren Board of Missions/Services, working first in Brazil and then in various countries with his brother-in-law, J. J. Toews. They worked in church planting ministry with third and fourth generation German colonists in Santa Catarina, Brazil. From January to June 1980, Peter and Lydia Dick served in the Neuwied Mennonite Brethren Church in Germany as interim Pastor.

For 19 years, 1977-1996, he translated the Adult Quarterly for the Lektionsheft, an adult Sunday School publication of the Canadian Conference of Mennonite Brethren Churches. Lovingly remembered and nicknamed “P.J.” by students and colleagues, one former student wrote a poem of tribute: “P.J. /Power-packed initials for a beautifully/humble saint…” Another student remembered him as “one of the kindest, most forgiving teachers I have ever had. Sometimes we thought he was too soft, too gullible, for we took advantage of him with our excuses and pranks in a way we would never dared with other teachers. But there were always glimpses of something.” He was emotional in a way that sometimes felt uncomfortable to teenagers in his class – tears of an older man, deeply moved by something he had seen or read.

Peter J. Dick loved his students and it was evident that he loved God as he served his church and community.