The Old Order Amish go to market, to town, and to church in a buggy, the "Wägeli." Like many current Amish practices the use of the buggy is a survival of an earlier general transportation pattern simplified to suit the Amish order of unworldly living and preserved in a rigidly prescribed form. The general type in the 1950s was a rectangular vehicle with a square top and sides, void of dashboard or whip socket, and without adornment. The occupant entered and left the vehicle in front by means of a step attached to the shafts. Certain Old Order Mennonites in Lancaster County, Pennsylvania, Wayne County, Ohio, Elkhart County, Indiana, and Waterloo County, Ontario, used similar vehicles. Both Old Order Amish and Old Order Mennonites forbid the ownership of automobiles by their members.

It has been a custom in most sections for the unmarried young Amish man to drive an open buggy without a top because it appeared less like the required Amish pattern. In the mid-20th century in northern Indiana several young Amish men laid aside their pride in favor of the greater comfort and protection from the weather afforded by the top buggy. In spite of jeers, the top buggy gained favor among the young men.

The buggy may take slightly different forms and colors in different Amish communities. In some sections, in the Kishacoquillas Valley in Mifflin County, Pennsylvania, for instance, after the Old Order Amish congregations had suffered several divisions, the color of the buggy was one of the distinguishing features of the various congregations, some prescribing yellow, some black, and some white. In Union County, Pennsylvania, the color was yellow; the oilcloth for the curtains was made by painting several thicknesses of cheesecloth with yellow paint.

In Union County and in some other sections glass windows were proscribed in the 1950s as too worldly. On one occasion while one of the members, a cabinetmaker, who served as casket maker for the congregation, was using his buggy to convey a casket to the cemetery, the first buggy following broke a singletree; and, not knowing that the relatives were not following, he drove on nearly half a mile ahead of the procession. In order to avoid such embarrassment in the future the congregation voted to permit him to have a very small piece of glass in the rear curtain of his buggy.

As the Amish moved westward, some communities gradually departed from the stricter old style. In adjoining Logan and Champaign counties in Ohio, the permitted differences were a cause of friction. At least one young man left the Logan County congregation to unite with the congregation in Champaign because the latter permitted certain "fancy" modifications of the older pattern.

In Old Order Amish congregations failure to observe the prescribed pattern places the member under censure of the church, and persistence in disobedience leads to excommunication. On one occasion in Logan County, Ohio, a minister who was in greatly straitened circumstances had an opportunity to purchase an old phaeton at a farm sale. His refusal to meet the demand of a fellow minister to dispose of this worldly vehicle became one of the causes for his severing his connection with the Amish Church and uniting with the Old Order German Baptist Brethren (Dunkards).

Among the Russo-German Mennonites the Old Colony Mennonites were opposed in the 1950s to the use of automobiles. Originally they used in Manitoba homemade wagons only and were opposed to the use of Canadian made wagons and buggies. Gradually the Canadian manufactured wagons and later the buggies found acceptance. Among the Old Colony Mennonites of Mexico it was permissible to use homemade vehicles with rubber tires drawn by horses, buggies to go to church and tractors to plow the fields; but automobiles were strictly prohibited. The buggies were the kind commonly in use in America before the coming of the automobile. The Sommerfeld Mennonites in Mexico and Paraguay were not quite as strict along these lines. -- John S. Umble

Horse-drawn transportation has been maintained as a matter of Christian discipleship by the most conservative elements in the Anabaptist family. The Old Order Amish, and over half of those identified as Old Order Mennonites and Old Colony Mennonites, forbid ownership and driving of automobiles. Small groups of Old Order River Brethren and Old Order German Baptists have the same rule. In the 1980s the membership of these groups totalled about 80,000, with a total population of about twice that number.

The Old Order people see the automobile as a disintegrating force affecting the family, church, and community. They feel that cars are an object of pride, not conducive to self-denial. The Old Orders also avoid involvement with the evil of insurance by using buggies rather than cars. The Old Orders do not feel the car is evil in itself. By forbidding ownership of cars, it is felt mobility is limited and thus many temptations are avoided. Old Orders will make use of public transportation (as they did in the pre-automobile age) and permit hiring cars and vans for special needs. In many communities, mobility is also limited by insisting on steel wheels on tractors (so they cannot be used for transportation on the road) and by forbidding bicycles. 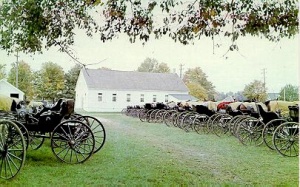 Since the demise of the buggy in the larger society, the manufacture of horse-drawn vehicles, as well as the related harness and farrier trades, have largely fallen into the hands of the Old Orders. Many shops specialize in certain aspects of buggy-making: wheels, axles, shafts, tops, hardware, etc. Amish and Mennonite craftsmen have introduced a number of improvements in buggy construction, including the use of fibreglass, roller-bearing axles, and hydraulic brakes. Old Colony Mennonites make extensive use of pneumatic tires. Other innovations which individual groups may accept or reject are sliding doors, hard rubber tires, and battery-operated lights. Buggy drivers have been persuaded by state governments to adopt various kinds of safety devices to increase the visibility of their vehicles on the roads. These include large, orange "slow-moving-vehicle" triangles, flashing red lights, and lunimous tape.

There are a great many regional and group vehicle styles among the various Old Order communities. Most Amish vehicles have black tops; however, in Pennsylvania gray tops are most common, and a minority use white and yellow tops. Amish communities in Adams and Montgomery County, Ind., permit only open buggies. Old Order Mennonite youth in Pennsylvania and Indiana and adults in Virginia have traditionally used buggies with fold-down tops. This style is being replaced by vehicles with stationary tops. Old Colony Mennonites in Mexico and other Latin American countries have constructed trailer-like vehicles on auto chassis