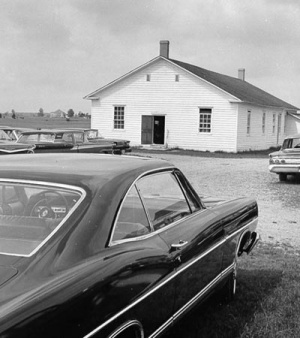 A commission appointed by the president of the United States concluded in 1933 that no other invention was diffused so rapidly in American life with such profound and far-reaching consequences as the car. With its speed and automatic mobility, the automobile became the symbol par excellence of modern life. The Mennonite and Amish reception of this modern contraption is a fascinating and diverse story. Reactions were mixed and heated in the first two decades of the 20th century. The more progressive and acculturated Mennonites welcomed the car with delight -- some were even the first in their communities to own one. The Amish and Old Order Mennonites rejected the "devil's machine" outright as a symbol of worldliness and pride. In most Mennonite groups, members gradually purchased automobiles while more conservative members resisted the new contraption for several years. By 1915 even bishops in the conservative Lancaster Conference of the Mennonite Church (MC) were buying cars, and by the early 1920s it was widely accepted in the majority of Mennonite conferences.

In the third decade of the 20th century, the automobile became a divisive wedge in a number of schisms in Old Order Mennonite groups in the United States and Canada. The Old Order division between the Weaverland Conference and the Groffdale Conference in the Lancaster area in 1927 hinged largely on the car. In the 1980s, some Old Order Mennonite groups in the United Stated accepted the car, other conservative groups permitted it if the bumpers are painted black to guard against pride, and still other Old Order groups clung to horsedrawn transportation (buggies). In the 1990s the Old Order Amish continued to prohibit car and truck ownership; however, expanding settlements and economic pressures have produced a compromise in which the hiring of cars and trucks is permitted for business and travel between settlements. Some "new order" Amish groups allow their members to purchase cars.

The debate over car ownership in Mennonite circles in the first two decades of the 20th century was not an idle one. The car symbolized individualism, independence, automatic mobility (automobile), freedom, speed, accelerated lifestyles, leisure, social status, and prestige. Such values were a threat to a sectarian subculture that heralded humility, submission, caution, simplicity, modesty, and separation from the world (nonconformity). The car, the child, and charm of modernity, menaced groups that hoped to preserve a pure, undefiled, and separated religious subculture. Hence, the acceptance and rejection of the automobile became a key indicator of modernization among Amish and Mennonite groups. Over the years, the car symbolized a firm boundary line between the groups that preferred the slow pace of tradition sharply separated from the world, and those willing to negotiate with the relentless forces of modernization. Members of Old Order groups, dissatisfied with the slow pace of change, would often join a more progressive Mennonite group in order to have a car. In the words of one Amishman, "The first thing people do when they leave our church is go out and buy a car."

The car transformed congregational life in profound ways for those groups that accepted it. The older pattern of congregational life that was geographically anchored in a local neighborhood was eroded by automobile transportation. With their new automatic mobility, members could drive to the church of their choice, regardless of distance. Informal social control diminished as members drove out of their immediate community to worship. Moreover, such mobility divorced public worship from the routines of daily life and the watchful eye of local church elders. The automobile enabled congregations to increase both the number of their members and the size of the meetinghouse since members could drive from a distance. In some cases small congregations closed and their members joined larger congregations outside their local community. In other cases, the ease of transportation permitted services to be held every Sunday instead of the older pattern of every other Sunday. The car transformed congregational life by diversifying its membership, eroding social control, increasing the size of membership and buildings, and by detaching it from a local geographical base. The car also enhanced opportunities for interaction with the larger culture in social, business, and leisure activities, shattering once and for all, rural isolation. Rejection of car ownership by the Amish has been a key factor in their ability to maintain small, locally based congregations that are essential for preserving their culture and deterring modernization.

The car increased interconference communications and enabled the development of strong conference structures among the Mennonites in the 20th century, structures that had begun to develop in the late 19th century with the aid of reliable and relatively afford able railroad transportation. Auto transportation facilitated home mission activity in the United States and Canada as well as overseas. While the car shrank geographical distance in many missionary efforts, it sometimes increased the social distance between missionaries and native populations who were still walking and using ox carts.

Kraybill, Donald B. The Riddle of Amish Culture (Baltimore: Johns Hopkins U. Press, 1989.

Wittlinger, Carlton O.  Quest for Piety and Obedience: The Story of the Brethren in Christ. Nappanee: Evangel Press, 1978: 343-44.