Wayne County, Ohio, established in 1796, was the third county formed from the original Northwest Territory and originally included parts of Ohio, Indiana, Illinois, Wisconsin, and all of Michigan. It now contains an area of 540 square miles, lying 30 miles south of Cleveland and 50 west of the Pennsylvania boundary. The soil, a deep clayey loam, is well adapted for growing wheat. The surface is mostly rolling, and formerly was heavily forested. 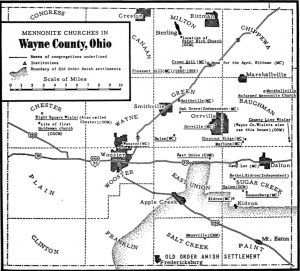 The earliest trail from east to west led from Pittsburgh, Pennsylvania, south of Wooster to Sandusky, Ohio. This may account for the early settlement of the area east of Wooster in Green Township and in Chester Township west-northwest. Although a few Amish ventured into Holmes County to the south as early as 1809 and Mennonites settled farther east in the state about the same time, neither Amish nor Mennonites attempted settlement in Wayne until the end of the War of 1812-14 had made the region relatively free from the danger of Indian raids. Amish from Somerset and Mifflin counties, Pennsylvania, arrived first and founded, in the townships lying east and northeast of Wooster, what later developed into the Oak Grove and Pleasant Hill Amish Mennonite congregation. Swiss Mennonites from the Bernese Jura founded Sonnenberg in 1819 and Chippeway (now Crown Hill) in 1825. Mennonites from Lancaster County, Pennsylvania, founded Martins Mennonite Church southeast of Orrville in 1824. Another group of Mennonites from Bucks County, Pennsylvania, settled in Chester Township during the late 1820s and early 1830s. They were akin to some of the Mennonites who founded the Guilford congregation in Medina County.

Several Wayne County congregations have become extinct or the members have moved away. The original Amish settlement in Green and Milton townships gradually became Amish Mennonite during the second half of the 19th century and are known as the Oak Grove and Pleasant Hill congregations. The small group who withdrew before the middle of the century to maintain an Old Order Amish congregation disappeared soon after the death of their bishop, Hannes Yoder. By the 1950s the Old Order Amish in the county had within recent decades been moving into the southeastern townships from the expanding congregations in Holmes County to the south. In the late 1950s they numbered 11 districts with 823 members. The Rich and Krabill families who left the Oak Grove congregation in 1869 and who later founded the Sterling, Ohio, Mennonite Church (General Conference Mennonite [GCM]) united with the Wadsworth Mennonite Church (GCM) about 1920. A small Brethren in Christ congregation, proselyted from the Amish and Mennonites in the county about the middle of the century, and though served by the highly respected elder Elias Schrock, became extinct before the end of the century. The John Holdeman Church, later called Church of God in Christ, Mennonite, was founded in Chester Township in 1859 and erected a meetinghouse there, but moved west about 1883. The city congregations in Orrville (founded 1909) and Wooster (founded 1942) are composed of families with varying background. The Conservative Mennonite congregations at Maysville and East Union originated out of the Old Order Amish in the 1950s.

All but one of the original Mennonite congregations (Martin's) became Old Order Mennonite (OOM) during the Wisler controversy in Elkhart County, Indiana, about 1871-72. Some of these were nearing extinction by the late 1950s. A few Milton Township Swiss Mennonites helped to found the Apostolic Christian Church in that township about 1855. The Sonnenberg Swiss Mennonite congregation had suffered considerable loss: first, in 1886 to the Salem congregation (GCM); in 1893-94 several members to the "Russelites," i.e., Jehovah's Witnesses; in 1917-19 to the Kidron Tabernacle, which during the 1950s lost most of its young people to the Missionary Church in Dalton; in 1935 to the Kidron congregation (Mennonite Church [MC]); and in the late 1950s 40 members to a new independent Bethel congregation near Apple Creek, formerly meeting in the Frog Pond schoolhouse.