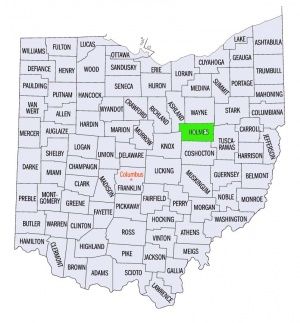 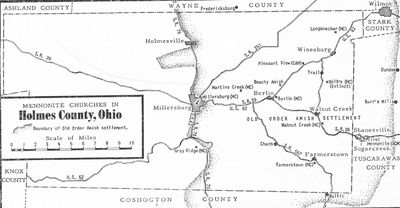 Holmes County in east central Ohio, the location of early Amish and Mennonite settlements, was formed from Wayne, Coshocton, and Tuscarawas counties in 1824, and was organized the next year. The section is very hilly with few railroads and most of the highways follow the winding course of some stream. Amish families named Troyer, Hochstetler, Weaver, and Gerber moved into the Walnut Creek and Sugar Creek valleys with the first settlers in 1809. Following the better farming areas they  spread north into Wayne County and east and northeast into Tuscarawas and Stark. The first Mennonite settlers came from Bucks County, Pennsylvania, settled near Wilmot in 1812 and erected two small meetinghouses—Kolb's (of logs, erected 1833; pronounced Kulps), and Longenecker's (hewn logs erected 1834). After an early period of great interest and growth during which two frame meetinghouses were erected the congregation declined. The Shoups and Mumaws moved to Wayne County, Ohio, and Elkhart County, Indiana. Attempts by nearby Amish Mennonites to revive the work met with only spasmodic success. Members of the Amish Church in the Walnut Creek Valley organized or participated in Sunday schools held in schoolhouses as early as 1859. Holmes County with Wayne was one of the centers of controversy between the more progressive Amish who were ready to allow a few cultural changes, to erect meetinghouses, and to make slight changes in the worship service and those who insisted on the strict old order. In the ministers' conference held during the early 1860s certain progressive leaders tried to introduce a less conservative interpretation of the Scriptures. The others made a strict adherence to the old rules and regulations—die alten Regel und Ordnungen—an absolute requirement of fellowship. Out of the controversy arose the Amish Mennonite and the Old Order Amish. Leaders of the opposing groups in Holmes County were "Big" Mose Miller and "Little" Mose Miller, the former insisting on progressive measures. Amish Mennonites established their first congregations at Walnut Creek and Martin's Creek. These have now grown into four regular congregations and a mission, and with Longenecker's had a combined membership of 1,414 in 1953, and three mission stations with 25 members. The congregations are Walnut Creek, Farmerstown, Martin's Creek, and Berlin, Longenecker's, and the mission Gray Ridge near Millersburg. All these belong to the Ohio Conference of Mennonite Church USA. A 1923-1925 schism in the Walnut Creek congregation resulted in the organization of a General Conference congregation in Sugarcreek just across the border in Tuscarawas County. The Old Order Amish membership in Holmes County and contiguous areas in Tuscarawas, Stark, and Wayne counties was over 4,000 in 1953, with 43 "districts" or congregations. This was the largest Old Order Amish settlement in North America. In 2007 the Amish population was about 19,000.

In the mid-20th century two Conservative Mennonite congregations were organized in the county, Pleasant View and Maysville, with a total membership of 340 in 1953. Thus the total Mennonite and Amish baptized membership in Holmes County and its immediately adjacent territory, all of whom, except Longenecker's, were the descendants of the original 1809 settlers and their later associates, equaled in 1956 approximately 6,000.

A Beachy Amish mission and a Church of God in Christ mission were also established.