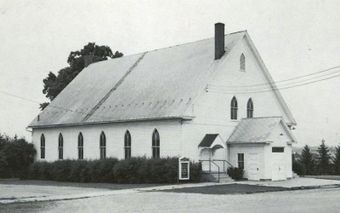 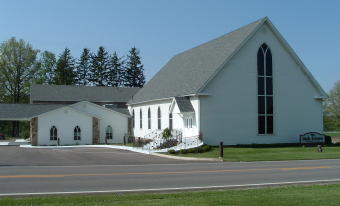 By the 1840's the Oak Grove congregation had become so large that it was divided into North and South districts. Each section had a bishop and several ministers. Worship services were held in member’s homes or barns every other Sunday with the remaining Sundays being a time of fellowship with church families.

The first meetinghouse (frame) was built in 1862. The church was known as the Amish Mennonite Center of Green Church, but the name was eventually changed to Oak Grove Amish Mennonite Church. The first building was built on what is presently part of the "old" cemetery on the current property along Smucker Road, East of Smithville.

A second church, (Pleasant Hill), was built in 1881 along what is now Pleasant Home Road, Northeast of Smithville to accommodate members in the northern part of the district. In 1905 the Oak Grove meetinghouse was replaced by the large frame structure used by the present congregation.

The early congregation was a member of the Amish General Conference (Diener-Versammlungen). The first of these conferences took place in the barn of Samuel Schrock, several miles east of the church. These meetings occurred to give the Amish congregations an opportunity to discuss issues of church policy. As time passed, the more conservative members withdrew and were soon called "Old Order Amish." Oak Grove became Amish Mennonite and later dropped the Amish from the church name. Oak Grove and Pleasant Hill became more progressive with Sunday schools, Young People’s Meetings, and laity participation. Members were involved with the Children’s Home, the Rittman Old People’s Home, and the Orrville and Canton Missions. C. Z. Yoder, an Oak Grove minister, was also active in the publishing of several conference hymnals.

During the 20th century, the Oak Grove congregation provided some unusual family and individual leadership on the local and international level. The Gerig family served in ministerial leadership over six decades beginning in 1895 with Benjamin Gerig (1842-1913) and his son Jacob Sebastian (J. S.) Gerig (1877-1964) and ending with Virgil M. Gerig (1918-2006) in 1960.

The Meyer family left a long educational legacy as Jacob Conrad (J. C.) Meyer (1888-1968) earned a Harvard PhD in history and made a career at Western Reserve University in Cleveland, all the while raising his family in Wayne County and giving strong congregational leadership. His son Albert Meyer (1926- ) became a physics professor at several Mennonite colleges, and for many years served as executive secretary for the Mennonite Board of Education of the Mennonite Church.

Lina Zook Ressler (1869-1948), grew up in the congregation and had a career as a teacher, writer, missionary, and editor. She served at the Chicago Home Mission in the 1890s, and at Elkhart Institute (later Goshen College) from 1901-1903 before leaving for India as a missionary with Jacob A. Ressler. Her literary skills well matched those of her editor husband Jacob (known as J. A.), and they moved to Scottdale, Pennsylvania, where for many years they worked with the children's publications Words of Cheer and Beams of Light. She was known to a generation of readers as “Aunt Lina.” Zook Ressler’s daughters Ruth (1906-2001) and Rhoda (1910-2008), long-time mission workers in Japan, returned to Orrville, Ohio, and lived their retirement years in their mother’s Oak Grove community

Orie Benjamin Gerig (1894-1976), son of bishop Jacob S. Gerig and Mary Anne Smucker, grew up in the congregation, studied at Goshen College, and married Mary Magdalene Blosser. After graduate school, he had a distinguished civil service career with the League of Nations during the 1930s and with the U.S. State Department during the 1940s and 1950s, helping to negotiate the transition of colonial territories in Africa and Asia toward independence in a post-colonial world. During the 1940s he was one of the main planners of the United Nations charter in San Francisco. During his final year in the State Department, Gerig served as an adviser to the American UN Ambassador Adlai Stevenson. Historian Gerlof D. Homan said, “his unassuming character and personality as manifested in his role as diplomat and chief of the Office of Dependent Affairs were a reflection of his Amish Mennonite upbringing at Oak Grove.” Few of Mennonite origins have served on this level of civil service, and Ben Gerig kept family relations during this time, including coming back to speak at Oak Grove after his retirement in 1962.

Alvin (A. C.) Ramseyer (1880-1948) was an entrepreneurial farmer, business leader and benefactor who founded the Mara Alva Farm (for wife Mary and Alvin) of purebred Guernseys. By 1932 the Ramseyer family took up potato farming for which A.C. is best remembered as “potato king,” at one time having 1,200 acres in cultivation, the largest potato grower in Ohio. A. C. and Mary Schrock Ramseyer emphasized education and their children attended Bluffton College where Ramseyer served on the board of overseers for 20 years; A. C. Ramseyer Auditorium in Bluffton University’s College Hall bears his name.

Theologian John Howard Yoder (1927-1997) grew up in the Oak Grove congregation where he was baptized and later ordained to the Christian ministry (1974). A brilliant scholar, prolific author, and professor at Anabaptist Mennonite Biblical Seminary and Notre Dame University, he was an apologist for Christian pacifism and best known for The Politics of Jesus (1972). By the 1990s, he also became known for his sexual harassment and abuse of women. When Yoder died in 1997, The New York Times obituary called him “a Mennonite theologian whose writings on Christianity and politics had a major impact on contemporary Christian thinking.”

During the 1980s and 1990s, two Oak Grove leaders James Schrag and Susan Mark Landis used the congregation as a base from which to move the denomination toward a church merger and a revitalized peace witness. Schrag, the Oak Grove pastor from 1985 to 1994, made the dual affiliated conference congregation an exhibit for the importance of merging the two denominations: Mennonite Church and General Conference Mennonite Church. Activist Mark Landis worked for the Mennonite Church denomination as peace advocate and as a minister of peace and justice from 1994 to 2011.

The present church was built in 1905, with additions and remodeling occurring every twenty years or so since. The Fellowship Center was built in 1949. In 1958, more land across the road, north of the church, was purchased for a new cemetery. In 1963 the parsonage was built, and in 1968 an educational wing was added to the church. In 2003 a carport was added, and the interior was totally remodeled.

The church has been active in relief work in war-torn countries with the Mennonite Central Committee (MCC), as well as financial aid and volunteer time with MCC Connections, the MCC Relief Sale, People to People, Boy’s Village, and Habitat for Humanity. The church has affirmed women in ministry since 1974 as well as having student pastors since 1958. Music, with a cappella hymn singing, choirs, quartets, the praise team, and the yearly Messiah program have been an important part of the church’s worship of God.