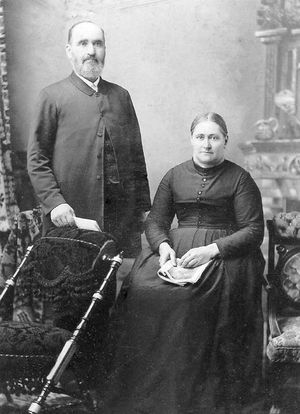 Menno Biehn Bowman: farmer, a leading pastor and a presiding elder in the Mennonite Brethren in Christ (MBiC) Church, Canada Conference, was born west of the village of Waterloo in Waterloo Township, Waterloo County, Ontario, Canada, on 20 May 1837 to Samuel W. Baumann (1804-1866) who came from Berks County, Pennsylvania, USA, and Anna Biehn (Beam) (1816-1905) who was born in Doon, Waterloo Township. Menno was the 2nd son of his mother, the second child of 14.

On 11 April 1858 Menno Bowman married Susan B. Snider (Susannah Schneider). She was born on the Schneider farm near Bloomingdale, Woolwich Township, Waterloo County on 2 December 1838. Her parents were Jacob J. Snyder (Schneider) Jr. (1794-1862) from Franklin County, Pennsylvania, and his second wife, Magdalena W. Baumann (1798-1850), a sister of his first wife, Mary, from Berks County, Pennsylvania.

Shortly after their marriage, Susan and Menno Bowman farmed on land which her father soon sold to them at Bloomingdale. On 25 May 1863 the two were baptized in the Grand River. Despite that public affirmation, Menno is reported to have been converted in 1865, probably influenced by Evangelical Association revivals in the community in that decade. When Snyder’s Meetinghouse needed to be rebuilt in 1872, Menno Bowman, who had just made a brick house for his mother, built the new structure, which still serves the Mennonite congregation in Bloomingdale.

Most members of Snyder’s supported the use of revival, prayer and testimony meetings in the 1870s, which temporarily cost the congregation fellowship with the Mennonite Conference of Ontario. The union of the New Mennonite Church and Solomon Eby’s Reforming Mennonite Society took place at Snyder’s in March 1875, where Bowman was a lay leader. He was a probationer accepted by the United Mennonites that year. Bowman served the Bright/Bethel (New Dundee) mission 1878-1880, during which time he was ordained an elder (1878) and the Sherkston mission in 1880-1882 during which he organized the first class of what became the large Twenty (Vineland) congregation. This happened shortly after the death of Daniel Hoch at the Twenty. Next he served Markham circuit 1882-1885 and the Maryborough and Wallace mission 1885-1886. From 1886 to 1899 Menno was elected every year as a Presiding Elder of the Canada Conference of the Mennonite Brethren in Christ Church. During these years he vigorously followed up members who were migrating to Michigan and Alberta, so that in 1896, Michigan was created as a separate MBiC Conference, and Alberta was prepared to become one in 1906. He promoted Sunday schools, fellowship with Christian Workers Churches in Toronto in the 1890s with a view to merger, and Noah Detwiler’s plan to open missions there in 1898. When Menno Bowman was elected Presiding Elder, he and Susan returned to their Bloomingdale farm, selling it in 1904 to live in Berlin (Kitchener).

Menno learned of sanctification from the German Methodists in Waterloo County (Evangelical Association and United Brethren in Christ), was present at the first camp meetings of the church in Fetter’s Grove, Indiana, in 1880 and Breslau, Ontario, in 1881, and became a solid supporter of holiness teaching. His report on part of a congregational quarterly meeting from Geneva, Gladwin Township, Michigan in 1894 suggests his style: “You should have been in our Sunday morning meeting. The fellowship and feet-washing meeting lasted two hours and a half. Singing, praying, feet-washing, testimony, running, jumping, shouting, laughing, crying, etc., was the order. Sometimes half a dozen were on their feet singing with all their might. Oh! it was glorious soul refreshing. You should have seen your correspondent sitting there so quietly, breathing in the heavenly breezes.”

Ezra Eby wrote that Menno Bowman did good work “notwithstanding the enemies he would have on account of his radical preaching and dealing with people.”