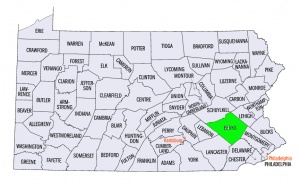 By 1714 the [[Yoder (Ioder, Joder, Jodter, Jotter, Yoeder, Yother, Yothers, Yotter)|Yoders]] from Switzerland had settled in Oley Valley near Pleasantville as the first Amish to settle in America, followed in 1732 and 1737 by the Kauffmans, Fishers, and Beilers. In the 1950s there was a flourishing Mennonite church of the Ohio and Eastern Conference in this area, largely composed of descendants of the early Amish pioneers of this region.

By 1740 the Amish had developed into their first organized congregation in the vicinity of Hamburg and by 1749 they had received their first pastor and leader from Switzerland, Bishop Jacob Hertzler (1703-1786), who had been ordained in Switzerland. The congregation was known as Northkill, having derived the name from a creek and a fort built of palisades in that community. In the assaults made (1754-1764) by the Delaware Indians in their desperate effort to reclaim the land, some of the Amish fell victim to the tomahawk in 1757. As a result most of the Amish from this area at the foot of the Blue Mountains moved to other parts of the county and province, and the Northkill congregation died out.

They organized congregations at the following places: Maiden Creek near Shillington, now extinct; Tulpehocken near Womelsdorf, now extinct; and a third in the very southern tip of the county in 1760, which became the first permanent Amish congregation in America and is known as the Conestoga Mennonite Church, a member of the Atlantic Coast Conference of Mennonite Church USA. This congregation founded three other congregations by the 1950s—the Rock in Caernarvon Township, Zion near Gibraltar, and Oley near Friedensburg.

Refugees from the Northkill congregation had also founded and organized congregations beyond the borders of Berks County. Families by the name of Zug, Lapp, Fisher, and Kauffman founded a flourishing colony near Malvern in Chester County, building the first Amish meetinghouse in America. The church became extinct in 1832, when most of the members moved westward into Lancaster County. Permanent settlements were founded by emigrants from Northkill, Maiden Creek, and Tulpehocken into Somerset and Mifflin counties. One colony was established in Lost Creek Valley, Juniata County, but it became extinct in the late 19th century.

The first Mennonite meetinghouse in Berks County, known as Hereford, was built about 1732 in Colebrookdale Township, in the southeastern corner of the county, where the earliest warrants for land were taken out 1720-1730 by Stauffers, Beidlers, Wistars, Bechtels, Molls, and Latshaws. At Bally, four miles from Hereford, in Washington Township, near the present site of Boyertown, another meetinghouse was built between 1772 and 1780. Both congregations are active today, and members of the Franconia Mennonite Conference. A General Conference congregation was organized at Hereford in 1848.

Some early Mennonites, comprising at least seven families who had settled in the vicinity of Sinking Springs and Womelsdorf in 1736 upon arrival from Switzerland, never had a pastor of their own. In several instances they had connections by marriage with the Zimmermans in Cocalico Township, Lancaster County. A family burial plot is still in existence with names of Ruchty and Deppen inscribed upon the tombstones. The descendants became members of the Lutheran or Reformed churches.