In 1922 a small group of Sommerfeld Mennonites settled in the Santa Clara region of Mexico. A further movement (comprising almost half of the Chortitz group) immigrated to the Chaco area of western Paraguay in 1926. They were joined by a small number of Manitoba Sommerfelder and most of the smaller Saskatchewan Bergthaler (Sommerfelder). In 1948 a Sommerfeld group emigrated from Canada to East Paraguay where they founded the Sommerfeld Colony. In that same year a group of Chortitzer Conference Mennonites left for East Paraguay, founding the Bergthal Colony and church. In 1963 a group of Saskatchewan Bergthaler (Sommerfelder) immigrated to Bolivia and founded the Bergthal Colony. They were soon joined by settlers from the Menno Colony of Paraguayan Chaco. A group of Sommerfeld Mennonites from Mexico founded the Sommerfeld Colony in Bolivia in 1968, and another group left Mexico for East Paraguay in 1972, founding the Santa Clara settlement. Reinländer Mennonites also participated in the 1963 movement to Bolivia. In 1983 members of the Sommerfeld churches in Manitoba founded Nueva Holanda Colony in Bolivia together with settlers from Menno Colony in the Chaco.

During the 1960s many Mennonites left Menno Colony in the Chaco for Bolivia because church and school activities seemed too progressive, and because of objections to the cooperative economic practices in the colony. A large group founded Canadiense Colony there.--Martin W. Friesen & Cornelius J. Dyck

In 1837 the Chortitza colony in Russia established its first daughter colony, Bergthal, consisting of five villages, Schoenthal, Schoenfeld, Heuboden, Friedensthal, and Bergthal, with Bergthal as the worship center. The widespread religious, educational, and agrarian renewal movements of the nineteenth century left Bergthal largely untouched. When new pressures from the Russian government threatened Bergthal through proposed educational and noncombatant-service legislation, the majority of the colony migrated to the Canadian prairies (1874-1876), settling east of the Red River in Manitoba, on land known as the East Reserve. After 1880 many homesteaders from the East Reserve relocated to the West Reserve because of better soil conditions.

The first West Reserve elder, Johann Funk (ordained 1882 by East Reserve Elder David Stoesz), lived in the village of Alt-Bergthal. In 1885 Funk and other leaders began to lay the groundwork for the establishing of the first western Canadian Mennonite secondary school, Mennonite Educational Institute, built in Gretna in 1889. In 1891 H. H. Ewert, a highly motivated Prussian Mennonite from Kansas, was called to give new life to the faltering school concept. Ewert, a charismatic leader, made far-reaching contributions to the educational, cultural, and spiritual renewal of the West Reserve Mennonites. Funk worked closely with Ewert for a parallel renewal in the church.

In 1892 Funk proposed a new direction in church activity. His proposal included an affirmation of the "old and tried foundation which is Jesus Christ," obedient discipleship, spiritual renewal, training of teachers, progressive schools, fellowship with other believers, the opening of the pulpits to ministers of other churches, and the preaching of the Gospel to the "heathen." Reaction against Funk and his coworkers was resolute. Already in the spring of 1892 an elder from the East Reserve was invited to baptize in the West Reserve churches, and by the spring of 1893 Abraham Doerksen was ordained in the village of Sommerfeld to give leadership to the conservative majority of West Reserve families, who came to be called the Sommerfeld Mennonite Church. Funk was left stranded with a few ministers, one church building, and about sixty families, a group that became known as Bergthal Mennonite Church of Manitoba (A).

Under Funk's leadership the Manitoba Bergthal Mennonites moved forward slowly. Progress during the first quarter century was hampered by various tensions: Mennonite Educational Institute location and direction, relationship to the General Conference Mennonite Church (GCM) Home Mission Board, and leadership difficulties. After 1926, with the leadership of Elder David Schulz, the church grew rapidly, reaching its peak of 3,500 members in 20 worship centers in 1972. Technically it was still a single congregation, according to the pattern that characterized Mennonite colonies in Russia and Latin America; functionally it had become in many ways a multi-congregation conference. At its peak the church had 44 ministers and 35 deacons. All but the leading elders were elected locally.

The founding of the Mennonite Educational Institute, the calling of H. H. Ewert, and the emphasis on public schools created the environment in which the Bergthaler Mennonite Church had its beginning. The church continued to support education in a Christian context. A private school was founded in Gretna, Manitoba in 1889. Schisms in the church, however, resulted in two schools in 1908: the Mennonite Collegiate Institute in Gretna and the Mennonite Educational Institute in Altona. The church was largely responsible for the founding of Elim Bible School and was involved with the development of Canadian Mennonite Bible College, though with less enthusiasm.

The church supported mission work from its beginning, and during the 1940s established Mennonite Pioneer Mission for work in Mexico and later with native people in Canada. The latter work was transferred to the Conference of Mennonites in Canada in 1957.

The ordaining of elders for the local congregations; the localization of finances; the younger church workers serving in the enlarging context of the provincial, Canadian, and international conferences and service agencies; and the developing competitiveness with its sister conferences accelerated the dissolution of the central church structure.

In the process of dissolution, Bergthal Mennonite radio work and scholarship funds were transferred to the Conference of Mennonites in Manitoba. The dissolution became final in 1972, although legal matters, including transfer of property titles, kept the official corporation alive until 1983.

Two congregations have closed doors: Kane, which amalgamated with Lowe Farm, and Arden, which dissolved. The Morris congregation joined the Evangelical Mennonite Brethren Conference (Fellowship of Evangelical Bible Churches). The Steinbach congregation severed relations with the various conferences in 1976, as did Gladstone in 1995 and Halbstadt in 1996. As of 1998, the remaining congregations related to the General Conference Mennonites on the provincial level and, with the exception of Grunthal, on the Canadian level.  Most congregations also belonged to the General Conference level. Some churches have dropped the "Bergthaler" prefix.--Henry J. Gerbrandt

Many of the Mennonites who settled near Rosthern, Saskatchewan in 1891 and 1892 later became part of the Saskatchewan Bergthal Mennonite Church (C). Some of these settlers came directly from Russia, others came from Manitoba, and one group came from Manitoba via Gleichen, Alberta in 1891. Among these settlers was a nucleus that had come from the Bergthal Colony in Russia and had left the overcrowded West Reserve for land in Saskatchewan. This latter group left the mother Bergthal church in Manitoba before the division that created the Sommerfeld Mennonites in 1894. Therefore, the Saskatchewan group retained the name Bergthal yet bore closer ties to the Sommerfeld group in Manitoba than to the Manitoba Bergthal Mennonites.

Elder David Stoesz of the Manitoba Chortitzer Mennonite (B) church of the East Reserve came to Saskatchewan in 1893 to organize the Bergthal Church. The Manitoba Chortitzer church was closely tied with the Sommerfeld Mennonites of the West Reserve until about 1958. Elder Stoesz ordained Kornelius Epp (1861-1936) as the first Saskatchewan Bergthal minister in 1893 at Rosthern. The church dissolved in 1896 when the group at Rosthern could not agree about who should serve them as elder. Some preferred the local elder Peter Regier of the Rosenort (GCM) Church. Kornelius Epp was ordained as elder in 1902 and served the group until 1908, when the church split because of differences over wedding rituals. Epp formed his own church, first in Lost River and later in Hague, Sask. He eventually moved to Mexico in the 1920s with a Sommerfeld group from Herbert. The remaining group was then led by Elder Aaron Zacharias who served the church until 1926. He died in Paraguay where he led a number of his followers in 1926. They, like Elder Epp, left Canada because the Canadian government refused to allow them to operate their own private schools as it had promised these Mennonites in 1873.

The members that remained in Canada were reunited under Elder Cornelius Hamm (1878-1947). This era brought many changes. The Waisenamt (widows' and orphans' fund) fell apart in the 1930s, largely as a result of the economic Depression. To help relieve the effects of poverty many Saskatchewan Bergthaler were resettled to northern Saskatchewan. A Sunday school program began in the 1940s as well as a change from High German to Low German in the worship services.

There have been three major migrations of Saskatchewan Bergthaler since the 1940s: one to Paraguay in 1948; another to Honduras under minister Jacob B. Guenter in 1951 (this group was refused entry and forced to return home); and a third in 1962, when a small group moved to Bolivia. The concern in each has been the desire to resist accommodation to the world.

The Bergthal Mennonites have emphasized their historic peace position, particularly during World Wars I and II, and again in 1980 when a uranium refinery was proposed for the Warman, Saskatchewan area. The refinery was opposed because of the relation between uranium and nuclear arms.

There have been two further divisions. In 1979 minister Jacob D. Peters formed a Sommerfeld church in Hague because of concern about too much English in church services. The second division occurred in 1983 when the leadership of the church was divided over the amount of accommodation to the world. A group of four ministers and one deacon left to form a church in Reinland.

The Saskatchewan Bergthal Mennonites became a member of Mennonite Central Committee (Canada) in 1984. The group had a membership of approximately 900 persons in 1990.--Leonard Doell 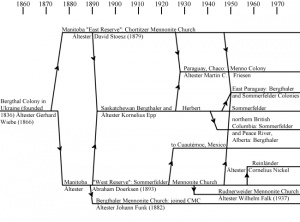 Bergthal Colony and Its Descendants

Peters, Klaas. The Bergthaler Mennonites. Winnipeg: CMBC, 1988, trans. by Margaret Loewen Reimer from a series of articles in Mennonitische Rundschau, January 1890, reprinted in German as a book in 1925, 1983.