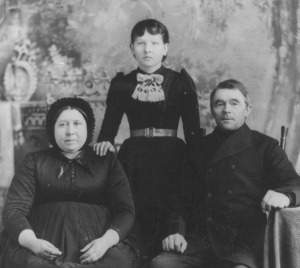 Funk grew up and was educated in Nieder-Chortitza. He was baptized on 27 May 1857 in the Bergthal Colony church and later that year he married Margaretha Braun. After her death in 1861, he married Susanna Rempel. In July 1875 Funk brought his family to Canada where they settled on the Manitoba East Reserve. He was ordained to the ministry by Gerhard Wiebe in 1877 and later to the position of Elder in 1882. Funk is most well known for the key role he played in the Gretna School controversy.

Questions were being raised in the church about the need for a Mennonite teacher training school. Funk supported schools to train teachers and sided with H. H. Ewert who became principal of the teacher training school at Gretna. This alienated him from the more conservative members and leaders in the church. The controversy came to a head in 1892 when Funk made clear his position on education and church discipline. Within a year the Bergthal church was divided. The majority followed Elder David Stoesz of the East Reserve but 60 families remained with Funk. Conflict continued to follow Funk during the remaining years of his ministry. These included conflict with the General Conference Mission Board over baptism and H. H. Ewert regarding the location for the school. In January of 1911 he was encouraged to resign from church leadership and was replaced by Elder Jacob Hoeppner.