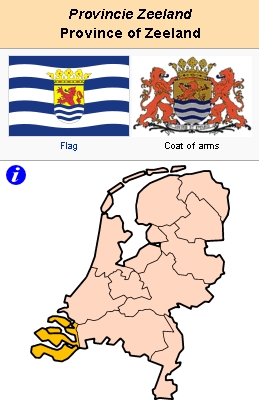 Zeeland, a Dutch province (1952 pop. 273,690, with ca. 650 Mennonites; 2005 pop. 379,948) in the southeastern part of the Netherlands, consists of the territory of Zealand Flanders, formerly called Staats-Vlaanderen, in 1814 added to Zeeland, and the following islands: Walcheren, South Beveland, North Beveland, Tholen, Sint Philipsland, and Schouwen-Duiveland. Anabaptism was found on Walcheren by 1534 (Middelburg, Veere, Arnemuiden) and at about the same time on Schouwen-Duiveland (Brouwershaven, Zierikzee), and Mennonite congregations developed here c1550 or earlier. But this early Anabaptist movement was not strong; the Zeeland congregations were considerably strengthened by the coming of Mennonites from Flanders, Belgium, from ca. 1560, and particularly after 1567. Even before this stream of refugees entered Zeeland, there were connections between the Anabaptists-Mennonites of Zeeland and those of Flanders. In the 16th century it was usually not the elders of Holland who baptized in Zeeland, but those of Flanders. The emigrants from Flanders settled in some Zeeland towns, establishing new congregations or strengthening the churches they found there. Most refugees, however, moved on to such places as Rotterdam, Leiden, Haarlem, and Amsterdam, and also to Friesland, to Emden in East Friesland, and to Danzig in Prussia. A number of these Mennonite refugee families lived for two or three generations in Zeeland, and then moved northward, particularly to Haarlem and Amsterdam.

About 1600 the following Mennonite congregations were found in the province of Zeeland: Aardenburg, Groede (or Cadzand), Vlissingen, Middelburg, Veere, Goes, St-Maartensdijk, Zierikzee, and Brouwershaven. Of these congregations only Aardenburg, Vlissingen, Middelburg, and Goes were still in existence in the 1950s. About 1670 the total number of baptized members in Zeeland was perhaps c1245. This number was c900 in 1730, barely 195 in 1800, 376 in 1900, and 431 in 1958. The large decrease of members from c1680 and the dissolution of some congregations was caused partly by the intolerance of the States of Zeeland and of the local magistrates of some towns like Aardenburg, Middelburg, and Zierikzee, but mostly by the fact that the Mennonite refugees from Flanders who had settled as merchants in the Zeeland towns gradually moved to South or North Holland towns where they had better business opportunities.

It was at Middelburg in 1577 and soon after in the whole province of Zeeland that through the benevolence of Prince William I of Orange the Dutch Mennonites became officially exempted from the oath and military service.