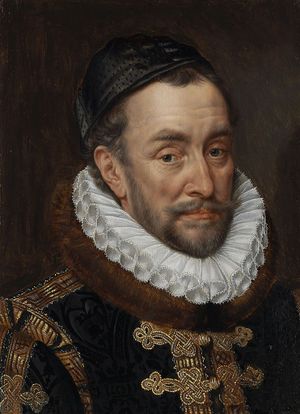 William I "the Silent" of Orange (Willem de Zwijger) was born at Dillenburg in Hesse-Nassau on 24 April 1533, the eldest son of William, Count of Nassau-Dillenburg (1487-1559) and Juliana, Countess of Stolberg-Wernigerode (1506-1580). He became Prince of Orange in 1544 upon the death of his cousin René of Châlon (1519-1544) and was appointed stadtholder (governor) of the provinces of Holland, Zeeland, and Utrecht by Philip II of Spain in 1559. William was assassinated on 10 July 1584 at Delft, Netherlands, and was succeeded as Prince of Orange by his son Philip William and as stadtholder in Holland and Zeeland by son Maurice.

In 1566, while serving Philip II of Spain as governor of Antwerp, he still insisted on the execution of the Mennonites. Two years later William led the revolt (War of Liberation) of the Netherlands against Spain. Then being appointed stadholder of Holland and Zeeland, his views completely changed. He now tried to unite all forces in the war against Spain. He left the Roman Catholic Church to become a Calvinist, and practiced tolerance even toward the Mennonites. Whereas some of his counselors (e.g., Marnix van St. Aldegonde) insisted on the persecution of the Mennonites, William defended them. On 20 April 1572, he wrote a letter to his governor in North Holland ordering that nobody should be hindered in preaching the Word of God. On 15 July of that year, in the meeting of the Dutch States-General, he proposed religious freedom. The States, however (particularly in 1583), resolved that in the United Netherlands only the Reformed Church should be allowed to meet publicly, all others being simply tolerated. In 1577, and again in 1578, 1580, and 1582, he defended the Mennonites of Middelburg, capital of Zeeland, against the local authorities, releasing them from swearing oaths and bearing arms, which privileges soon became valid throughout the Netherlands. It seems somewhat contrary to this policy of toleration that in 1581 William issued a mandate in accord with the views of the States-General, ordering that no other religion but the Reformed be granted the public exercise of its faith. But this mandate was meant to break the influence and power of the Catholic Church, whose members often were pro-Spanish, though it was later often used against the Mennonites.

The Mennonites on their part were grateful to William for his protection and the granted privileges. As early as 29 July 1572, two Waterlander leaders (see Pieter Willemsz Bogaert and D. J. Cortenbosch) brought to the Prince of Orange 1060 guilders in the name of the Dutch Mennonites, to be used for the welfare of the country.