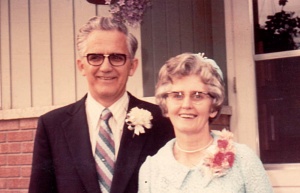 Peter’s parents were killed in 1920 following a bomb blast during the civil war that followed the Revolution. The youngest child, a girl, died shortly thereafter while Victor and his older brother, Peter, were adopted by his uncle and aunt, Abram and Helena (Janz) Toews. This family immigrated to Canada in 1926 while his older sister, Elfrieda, taken in by other relatives, permanently remained in Russia.

Upon arriving in Canada the Abram Toews family stayed in Winnipeg, Manitoba for a few months but soon moved to a farm near Coaldale, Alberta. They had several more children, giving Victor a total of three brothers and three sisters. Victor completed high school in Coaldale and at the age of 16 accepted salvation and dedicated his life to God. In 1937 he was baptized and joined the Coaldale Mennonite Brethren Church. In the following years he attended the Coaldale and Bethany (Saskatchewan) Bible Schools and the Mennonite Brethren Bible College (MBBC) in Winnipeg, where he received a Bachelor of Theology degree in 1947. Also at MBBC he met Anne Peters, a nurse from British Columbia. They were married in 1946 at Sardis, BC. Anne served an integral, supportive role in Victor’s long ministry, particularly in the area of care-giving.

From 1947 to 1949 Victor taught at the East Chilliwack Mennonite Brethren Bible School in Chilliwack, BC. He then enrolled in the University of British Columbia in Vancouver, earning a Bachelor of Arts degree and a teaching certificate by 1952. In 1951 he was ordained as an MB minister. From 1952 to 1956 the family lived in the Mennonite colony of Fernheim in Paraguay where Victor served in teaching and pastoral ministries. Upon his return to Canada, Victor taught at MBBC for two years and from 1958 until 1976 he served as a high school teacher in Winnipeg. During these years he earned B. Ed and M.A. degrees from the University of Manitoba.

Throughout the years in Winnipeg, Victor also served as an assistant pastor, unsalaried, in the North Kildonan Mennonite Brethren Church. From this base he helped to start the River East Mennonite Brethren Church. He also spoke in various other churches – in English and German – and at various times he served on provincial and national Mennonite Brethren committees. He left teaching in 1976 and became the senior pastor of the Culloden MB Church in Vancouver, retiring from this in 1984. The next year he and Anne moved to Niverville, Manitoba where he served as interim pastor for one year. In 1986 Victor and Anne moved back to Winnipeg, where they could spend more time with their children and grandchildren. Victor also resumed his wood-working hobby, making, among other things, a "grandfather’s clock" for each of his children.

Victor Toews was blessed with a thankful, generous and unpretentious spirit and a rich and curious mind characterized by wit and good humor. While education was important to him, he used his knowledge in practical rather than academic ways. In the context of his church work his ability to find practical solutions to difficult problems was greatly appreciated. He had a very human approach to his Christian faith, understanding that for those for whom "the Word has become flesh" all aspects of life are sacred. He had a deep appreciation and respect for other people, accepting them as they are. They in turn blessed him with a rich variety of friendships.