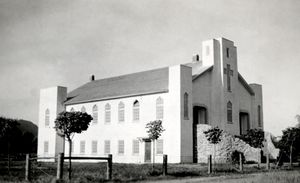 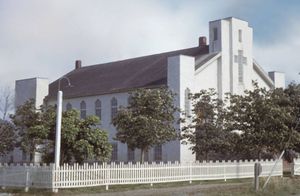 Greendale, located south-west of the city of Chilliwack, was established in 1930. Soon Mennonites from the Canadian prairies began to settle in Greendale. The first Mennonite Brethren (MB) service was held in a private home the first Sunday after Easter 1930. On 11 January 1931, 22 individuals voted to organize the Sardis Mennonite Brethren Church (the name was changed to Greendale MB Church in 1953), an independent MB congregation with Heinrich G. "Henry" Dueck elected as leader and with Jacob B. Harder as assistant leader.

In 1931 the members decided to construct a church building, measuring 30 by 40 feet, on property donated by Henry and Justina Dueck. By the end of 1939 the membership had more than doubled and a larger church building measuring 70 by 40 feet was constructed and dedicated in 1940. Further renovations were done after 1966 and in 1977 an addition was planned to accommodate church-related activities and social events.

After the economic stress of the 1930s, the church experienced much growth. They accepted 417 new members during the 1940s and reached a record of 499 members in the mid 1940s. The second church building, which had been dedicated in 1940, no longer offered adequate space for the congregation, and the members were again ready to share their wealth to acquire more room.

Unfortunately, everything was halted due to the 1948 flood when a late and rapid spring thaw caused the Fraser River to rise to dangerous levels eventually breaking through dykes and putting the Greendale and surrounding districts under 10-20 feet of water. The church basement was flooded to within a few inches of the ceiling and many people lost a substantial amount of property.  During the necessary renovations the church met in a ground level hayloft and an empty chicken barn.

The year 1948 also marked a transition in church growth. Whereas the years 1945-48 had been ones of rising economic prosperity and increasing church membership, after the flood many members moved away from the area. The berry markets had collapsed and the vulnerability of the terrain made opportunities in business and construction elsewhere more lucrative. Some families moved to Vancouver to seek employment or establish businesses, and some who had work in Chilliwack, transferred their membership to the Broadway Mennonite Brethren Church. Other decisions to leave were based on the language issue with some members dissatisfied with the slowness in adopting the English language. In total 227 members transferred to other Mennonite Brethren churches in the 1950s.

In 1965 the church voted to conduct all church business meetings in English, and Sunday morning services were to have a German and English message. By 1968, two services were planned. One English and one German. They also decided to renovate the sanctuary rather than construct a new building. This was undertaken in 1966.  In 1977, they decided to construct a building that would accommodate more church-related activities and social events. The facilities were completed in 1979 for the approaching 50th anniversary of the church in June 1981.

In recent years the demographics of the congregation have changed, with fewer engaged in full-time agriculture and more engaged in employment in the city.  The vast increase in residential development in the area has also brought many new families to the congregation that have little if any connection to the church’s past history.

In 2010 the congregation's membership was 283 with an average attendance of 272.