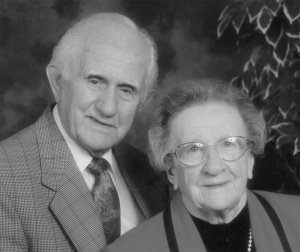 When Peter was four years old his parents were killed in a Russian civil war skirmish. Peter and his three siblings were orphaned by this tragedy and placed in homes of close relatives. Peter and his brother Victor came to the home of their uncle and aunt, Abram A. Toews (1887-1962) and Helena (Janz) Toews (1894-1993). They immigrated to Canada in 1926 and settled on irrigation land in Coaldale, Alberta. Much to his regret, Peter was never to see his oldest sister again.