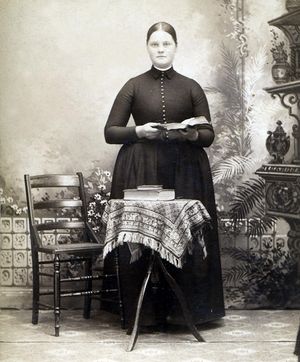 Mary Ann (Hallman) Simmons was a preacher and evangelist of the Canada and Michigan conferences of the Mennonite Brethren in Christ Church, the second woman of the church to be licensed as a minister of the gospel after Janet Douglas Hall.

On 27 September 1892, Mary Ann Hallman married Rev. William Simmons of Port Huron, Michigan. He was converted at 21 years of age, experienced sanctification and joined the Evangelical Association, later being ordained by them. William was born in Shakespeare, Perth County, Ontario, on 16 July 1849 to English-born Henry Simmons (born about 1816) and Elizabeth Shirk (15 May 1816-1891). In the 1861 Canada census, the family, including William and five siblings, were recorded as members of the Church of England, but Elizabeth at least died as a member of the Evangelical Association. William had previously been married (8 July 1877) to Paulina Pleiter (21 Aug 1853-7 February 1890), and had two daughters, one of whom had died at 8 years of age.

Mary Ann Hallman described her younger self as a “wild misch[i]e[v]ous girl.” Although Mary Ann's parents were members of the Mennonite Conference of Ontario, her conversion at 16 on 24 February 1884 was through the MBiC at the Bethel Church, New Dundee, when Wesley Schlichter preached on the text, “How long halt ye between two opinions (I Kings 18: 21)?” Shortly after experiencing sanctification about one year later, she felt a “go or lose her soul” call to public work at age 18 (1885). Her parents were scandalized and bitterly opposed the thought of women preaching and she herself “fought” the call for a while as impressions from the devil. A few years later she was reconciled with her mother.

Many Ontario Mennonites and Amish were migrating to Michigan in the last decades of the 19th century, and Mary Ann Hallman found it easier to began preaching in 1885 in connection with MBiC settlers in Greenwood Township, St Clair County, Michigan. She had an experienced co-worker for a time in Harriet “Hattie” Bates, at first a Free Methodist evangelist who married Allen Schlichter in 1888, (another son of Samuel Schlichter, New Mennonite preacher at New Dundee). Some tent meetings she conducted in Michigan resulted in churches. She also preached as an evangelist in Ontario, Indiana and Ohio. In 1887 Hallman approached the Canada Conference for recognition as a probationer, and was appointed an evangelist the next year. She wrote reports to the Gospel Banner from central Michigan. In 1891 she was appointed as a helper to Oliver B. Schneider/Snyder in Greenwood. When marriage to William Simmons approached (in Berlin in the home of her parents), she declared herself “conditional” (i.e. she had a restriction to accepting certain appointments). After her marriage she was again appointed as an evangelist in Michigan, and she reported from places such as Gettysburg, Ohio; Hespeler and Kilsyth, Ontario; and Fort Gratiot, St Clair County. In March, 1895, Mary Ann and William were appointed to Huron County, Michigan. For several years she continued as an evangelist after 1896 under the newly formed MBiC Michigan Conference.

The couple settled at Cedar Springs, Kent County, where the Michigan Conference (now Michigan Region, Missionary Church) developed a camp meeting site, and reported on occasional evangelistic meetings around Michigan. Overwork in evangelism left Mary Ann Simmons ill a number of times, but she reported healings after anointing and prayer. On the other hand, about 1890 she recovered from typhoid through 12 weeks of dedicated nursing in the home of MBiC evangelist Andrew Good at New Carlisle, Ohio. In later years, she was concerned that the church's commitment to plainness in clothing was losing out to worldly interests. Gospel Banner editor Ray Pannabecker recalled, “As a young boy I first remember seeing and hearing Sister Simmons as she gave her never-to-be-forgotten testimonies and exhortations. She had come up the hard way and had known what it meant to work for the Lord and sacrifice...May her rich life continue to testify to a needy world....”