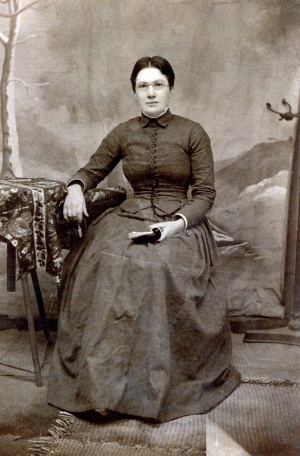 Janet Douglas grew up in a Presbyterian home in Huron County, Ontario. In 1877 or 1878 she moved with her family to Michigan, near Brown City. In February 1882 she was converted in evangelistic meetings held by David U. Lambert, an Evangelical United Mennonite (later Mennonite Brethren in Christ) minister. She began children's meetings in her home on Saturday afternoons during that summer. In the early months of 1884 she assisted S. B. Shaw, a holiness evangelist, in his meetings in Grand Rapids through visitation and personal witnessing. On one occasion she led a prayer meeting when Shaw's wife was unable to fill the appointment. Following this meeting she was asked to hold revival meetings in a nearby vacant church, which she did for five weeks.

According to her own testimony, she scarcely know how to preach, so her services consisted primarily of testimonies followed by a 10-12 minute sermon. However over 100 persons professed conversion at these initial meetings. She then held evangelistic campaigns in other areas of Michigan, sometimes facing opposition because of her gender. On one occasion a woman advised her to "let the men preach, and go home and help your mother." One experienced evangelist who heard her preach in 1885 commended her content, but said she needed to speak more slowly.

In mid-1885 Janet Douglas went to Ontario and preached in all the major Mennonite Brethren in Christ communities as part of a traveling tent meeting or "tabernacle." She led evangelistic services in Elmwood and Dornoch, Ontario, pastored the church in Dornoch in 1886/87 and raised money for building a church in the community. She was formally accepted as a "laborer" in the Ontario Conference in April 1886 and twice made presentations at the conference's Ministerial Association. During 1886/87 she assisted H. S. Hallman at the Elmwood congregation, and led two series of evangelistic services at Kilsyth, south of Owen Sound, Ontario. In 1888 she was named a conference evangelist, but returned to Michigan in mid-year. In 1886 she compiled a hymnbook, Emmanuel Hymns for the Worship of God, for use in her evangelistic services. Shortly after her marriage to James Hall (who was converted at one of her meetings and was accepted as a probationary minister in the Ontario conference on 13 March 1889) they jointly served in rural mission work in Northern Michigan.

In summer 1896 the family moved to California for health reasons, but returned to Michigan in 1903. In 1910 they homesteaded in Alberta, nine miles west of Alsask, Saskatchewan, where James served as a minister until they retired to Kitchener, Ontario in about 1929. Janet Douglas Hall preached at each location, but over time her public ministry decreased significantly. In Alberta she primarily led Sunday schools and helped provide leadership at camp meetings. James Hall took part in evangelistic services in Michigan only 10 weeks before his death.

Janet Douglas Hall was a true pioneer in women's ministry, with many women within the Mennonite Brethren in Christ denomination soon following her example. She died in relative obscurity as the role of women leaders was increasingly reduced in the denomination, especially in the 1930s and 1940s. Janet Douglas Hall and James Hall are buried at First Mennonite Church in Kitchener, Ontario. Prominent Mennonite Brethren in Christ leaders who were converted and brought into the church by Janet Douglas included Ebenezer Anthony (1865-1913) and Maude E. Chatham (25 March 1870-23 November 1951).