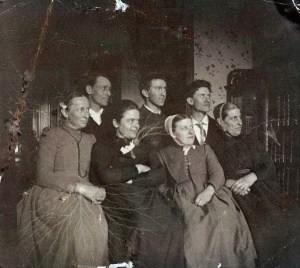 Barbara Sherk: writer, mission worker and correspondent with church leaders, was born 31 October 1847 to Elizabeth (Betzner) Sherk (10 May 1811-26 August 1894) and David Sherk (9 September 1801-19 September 1882), who was the first white child born in what became Waterloo County in Ontario, Canada after David's parents, Joseph and Elizabeth (Betzner) Sherk, migrated from Pennsylvania in 1800. Barbara was the eighth of ten children, seven girls and three boys. She never married. Barbara died 23 September 1920 and is buried in the Breslau Mennonite cemetery.

Church work was important in Barbara's home. The Mennonite Encyclopedia describes her father as “one of the leading ministers of the Ontario Mennonite Conference” during his time. He also authored a book, Non Conformity to the World (1882) and articles in the Mennonite bi-monthly magazine, Herald of Truth. Barbara may have been a scribe for her father, who called himself an “unlettered man” and she may actually have written some of his published work. There is no evidence that Barbara's education extended beyond elementary school, which was common in her day, but she had remarkable language skills. Barbara herself wrote numerous devotional articles for the Herald of Truth beginning in 1892. According to Carol Penner, Barbara's writing is filled with “stock phrases of theological fundamentalism” and reveals little of Barbara's own faith or life. Her writing expounded on biblical stories and the love of God, called Christians to be more devout, and emphasized service.

From 1892 to 1898 Barbara also wrote lengthy letters to prominent Mennonite church leaders John S. Coffman, whom she considered a mentor, and publisher John F. Funk. Her letters, rather than her published articles, show her strong will and eagerness to express her often critical opinions.

In 1894, after the death of her mother with whom she lived, Barbara went to the Chicago Home Mission founded in 1893, one of the first Mennonite city missions operating programs for poor people. No doubt her involvement in this mission was due to the preaching and the emphasis on service of J. S. Coffman whose revival meetings in the Waterloo area as early as 1882 influenced many young people. Coffman's son, Fred (Samuel F.), was the mission's superintendent. Barbara served there from December 1894 until August 1895 when the mission closed temporarily. She did not return; Barbara had little money and the church, which tended to oppose women in public ministry, provided no financial support. Back in Ontario, Barbara kept house for her brother, wrote for the Herald of Truth and got involved with the temperance movement. She never realized her dream of establishing an orphans home.

Barbara Sherk was ahead of her time in fearlessly voicing her views privately to prominent church leaders. She was a giving and gracious person, sacrificing her life and dreams in serving the poor and caring for her ageing mother and brother until the end of their lives.