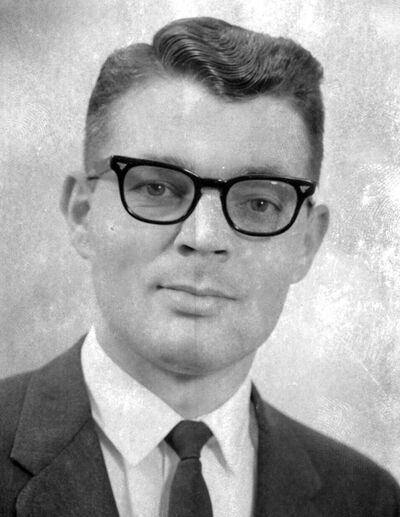 Wilbert Ray Shenk: missions administrator, historian, and author, was born near Sheridan, Oregon, USA, on 16 January 1935 to Kenneth Marion Shenk (30 December 1912-19 March 2010) and Frances Kilmer Shenk (18 June 1916-4 February 2012). Wilbert was the oldest child in a family of five sons and one daughter. He grew up in a family engaged in the logging industry. On 10 October 1957, he married Juanita Grace Brenneman (1934- ), daughter of Frederick Stauffer Brenneman (11 December 1903-28 January 1977) and Millie Elizabeth Page Brenneman (14 November 1905-20 March 1995). They were married in Bandung, Indonesia. Wilbert and Juanita had two daughters and one son. Wilbert Shenk died 13 July 2021 in Goshen, Indiana. He was cremated, with his ashes kept in the columbarium at the Belmont Mennonite Church, Elkhart, Indiana.

From 1951 to 1953 Wilbert Shenk attended Hesston College, where he met his future wife. He then attended Goshen College. Immediately following his graduation in 1955 with a BA, Wilbert served as a Mennonite Central Committee (MCC) volunteer in Indonesia to 1959. He spent the next three years in Eugene, Oregon, earning an MA in Economics from the University of Oregon. This was followed by a two-year term of service as an administrator for MCC.

From 1965 to 1990 Wilbert served as an administrator for the Mennonite Board of Missions (MBM, later Mennonite Mission Network), overseeing its international ministries. He was instrumental in helping MBM refocus its emphasis from colonizing church planting toward sustained mission-related relationships with religious groups around the world as well as the missional research to underpin that effort. He initiated and edited Mission Focus and Mission Focus: Annual Review, and helped launch the Missionary Study Fellowship. He also was a longtime officer of the American Society of Missiology.

During this time, he worked on a doctoral degree from the University of Aberdeen, Scotland, which he completed in 1978. His dissertation on Henry Venn, a British mission leader in the 19th century, was published by Orbis Books in 1983.

Following his time at MBM, Wilbert taught at Associated Mennonite Biblical Seminary in Elkhart, Indiana, from 1990 to 1995 and then at Fuller Theological Seminary in Pasadena, California, from 1995 to 2005. Through his courses on mission history, mission theology, and mission in contemporary culture, Shenk taught thousands of students over the years in Fuller’s English and Korean programs, and mentored dozens of PhD and DMiss/DIS students toward their doctoral degrees. Even in his retirement he stayed active as a senior professor by continuing to teach short courses at Fuller and to mentor doctoral students.

As a close colleague of missiologists Andrew Walls and Lesslie Newbigin, as a founding member of the American Society of Missiology, and as the author/editor of numerous books and articles, Wilbert left a profound legacy in the field of missiology. “Through his writing, teaching, and vast network of personal relationships,” said James R. Krabill, former Mennonite Mission Network administrator, “his influence spilled out far beyond the Mennonite community to virtually every corner of the global church family.”

His book publications included Changing Frontiers of mission (1999), By Faith they went out: Mennonite missions, 1850–1999 (2000), Enlarging the story: perspectives on Writing world christian history (2002), and North American foreign missions, 1810–1914: theology, theory, and policy (2004). In addition, Wilbert published numerous articles and reviews in The Mennonite Quarterly Review and he remained a contributing editor to the International Bulletin of Mission Research from 1977 until the end of his life. He also served as a consulting editor of the Dictionary of Mission Theology: Evangelical Foundations (2007) and the History of the American Society of Missiology, 1973–2013 (2014).

“Wilbert was a paragon of missiology,” recalled Dave Scott, associate dean of the School of Mission and Theology. “And while his quiet kindness and tact were always on display, his critical faculties never wavered, making him an extraordinary mentor and coach for master’s and doctoral students alike.”