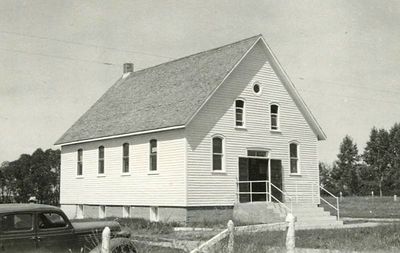 The Mennonite community at Guernsey, Saskatchewan had its origin in the winter of 1903-1904 when a committee from Berlin (now Kitchener), Ontario inspected the Saskatchewan Mennonite Reserve at the encouragement of Peter and John Jansen of Nebraska, who were land agents for the Saskatchewan Valley and Manitoba Land Company. A delegation of five men travelled west in May 1904, but they were not impressed with the many sloughs full of spring run-off. In June of that year, a second group made the trip and they reserved a sizable block of newly surveyed unbroken territory in what was known as the Quill Lake Mennonite Reserve. Homesteads of 160 acres could be acquired for an entry fee of $10 and a commitment to reside on the homestead for six months in each of the following three years.

In 1905 the first settlers left from Ontario, followed in 1906 by another group. On a Sunday morning in May 1905, about 30 Mennonites, newly arrived from Berlin, Ontario, gathered in a tent for their first worship service. The tent was erected on the homestead of their deacon, Aaron Biehn. They worshipped God, thanking him for safe travel and asking for his blessing on their endeavour to establish a new community in a new land. The first sermon in the community was preached by Eli S. Hallman. That day, Hallman was affirmed as their minister. A short time later, a Sunday school was organized under the leadership of Israel Cressman.

The congregation met each Sunday at the Biehn home. In July 1907, the Waterloo school was built on the southwest corner of the deacon’s property. The next year, the Sharon congregation hosted the Alberta Mennonite summer conference in the Waterloo schoolhouse and became a member of the Alberta-Saskatchewan Mennonite Conference. The dream of a church building was realized in 1911, when a 30 ft. by 40 ft. building was erected at the crossroads, on land donated by the minister. Using volunteer labour, the cost of the building was $2,300.

Over the years the people faced many hardships, including raging prairie fires, early frosts, hailstorms, tornadoes, drought and blowing sand, swamp fever and other ailments. In spite of these difficulties, they established beautiful farms and the Sharon church community thrived.

Eventually, attendance at the church diminished. A potash company bought up several farms, forcing some families to relocate. When young people found employment elsewhere and when grain elevators, stores and schools closed, the congregation also suffered.

In 2003, the difficult decision was made to close the doors of Sharon Mennonite. The final service was held 27 June 2004. Some of the remaining members transferred to the North Star Mennonite Church at nearby Drake, Saskatchewan.

Snider, Doreen. Called to a Place: the Story of Guernsey and Surrounding School Districts. Lanigan, 1980.