From GAMEO
Revision as of 08:35, 1 October 2013 by RichardThiessen (talk | contribs) (Added hyperlinks.)
(diff) ← Older revision | Latest revision (diff) | Newer revision → (diff)
Jump to navigation Jump to search
A checked version of this page, approved on 1 October 2013, was based on this revision. 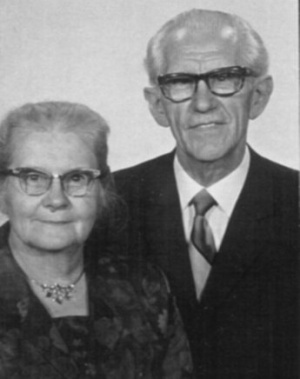 Hugo was baptized 24 May 1915 in the Mennonitengemeinde Thiensdorf, West Prussia where he was active in Sunday school and youth work. He attended the Missions Schule (Bible seminary) in Wernigerode (Harz) Germany, from 1924-26. Here he received a good foundation in Bible knowledge and exegesis and was also influenced by his teacher and mentor, Jakob Kroeker, with a love for the universal body of Christ and his word. In Wernigerode he met Susanna Janzen.

Hugo and Susanna were married in 1928. Both of them worked on his father's second farm for a year. In 1929 he applied for a pastoral position in Sembach, Germany and served that Mennonite congregation from 1929 to 1935. In 1935 the Mennonite congregation in Kaiserslautern called him and he was their pastor from 1935-1951.