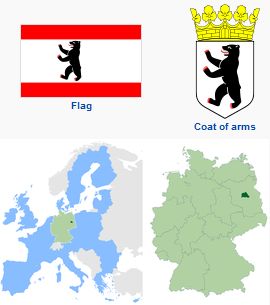 Berlin, the capital of Germany, seat of a Mennonite congregation since 1887. On 2 October 1884, representatives of many Mennonite churches from various parts of Germany met in Hotel Schmidt (zur Stadtbahn); this meeting led to the founding in 1886 of the Vereinigung der Mennoniten-Gemeinden im Deutschen Reich. At that time the Mennonites living in Berlin were invited to meet in the hotel, where H. G. Mannhardt, minister of the Danzig congregation, urged them to form a union to prevent their being lost to the church. This gave rise to the Vereinigung der Berliner Mennoniten, which at first arranged for social meetings to discuss Mennonite affairs and then through voluntary contributions made it possible for the Berlin Mennonites to have occasional services.

The first service of worship was held on 16 January 1886 in the City Hotel on Dresden Street, where Hinrich van der Smissen, minister of the Hamburg-Altona church, preached on Ephesians 2:20-22. But since the use of a hotel room soon created some difficulties, subsequent services were held in the church of the Moravian Brethren. On 17 January 1887, 12 members of the Vereinigung with their families met and chose as their board Willy Molenaar, Hermann Wiens, Rudolph Goerke, Gustav Woelcke, and Isaak Brons. The carefully weighed rules were set up in general on the pattern of the constitution of the Danzig church. Male members who paid a fee of at least five marks were entitled to vote at the business meetings, held biannually. The board, which was elected for five years, chose a chairman, who granted certificates and kept the books, a secretary, who kept the records of their monthly meetings, and a treasurer.

Since the congregation did not have adequate funds to employ a preacher, preachers from other churches came on a regular schedule to conduct 11 Sunday services per year in the church of the Moravian Brethren, Wilhelmstrasse 136. The first were H. van der Smissen (Altona), H. G. Mannhardt (Danzig), C. Harder (Elbing), E. Weydmann (Krefeld), J. P. Müller (Emden). After the death of the last three, they were succeeded by A. Siebert (Elbing), G. Kraemer (Krefeld), J. G. Appeldoorn (Emden), and Christian Neff (Weierhof). Baptism and communion were usually administered by van der Smissen and Mannhardt. Since the regular offerings of the members did not suffice to assure these regular services the Vereinigung der Mennoniten-Gemeinden im Deutschen Reich contributed 500 marks annually. The Berlin church did not have corporation rights. At first it used the hymnal of the West Prussian churches, but in May 1908 decided to use the new one published by the Danzig church. The church grew steadily. In 1893 it had 80 members; in 1902, 147; in 1910, 248; in 1914, 279. In January 1912 it celebrated its 25th anniversary. -- Emil Händiges

In the quarter century 1912-1937 World War I and the inflation struck serious wounds in the Berlin congregation, eleven of its members falling in the tragic war. A large new influx of members arrived from the country, especially from the East, from Holland, and many from Russia. And in the city, a city-born generation grew up. Chairmen were Molenaar to 1907, Goerke to 1925, Ernst Harder to 1927, Willy Pauls to 1930, Ernst Crous to 1946. The latter, living in Göttingen, continued the spiritual oversight until 1951. In 1927 the congregation instituted an agency for the care of its youth, in 1929 an organized provision for its poor, in 1934 regular baptismal instruction. In 1931, the year of the great depression, the congregation began to provide for its own services for Christmas, and later also on Good Friday, Easter, and Pentecost; in 1933 a children's celebration was inaugurated for the first Sunday of Advent. In 1935 the first missionary conference took place.

Use was made of theological students in providing preaching services. In 1936 Horst Quiring was engaged as part-time pastor, continuing in this office until he was inducted into military service in 1939, resigning after his return from Russian imprisonment (1947). In lectures and in discussion groups current church matters were discussed.

For some years valuable initiative was furnished by Johannes van Riesen; he later left the congregation, since it was apparently not willing to follow him in every respect. For nine years, 1933-1941, it was possible to publish a news leaflet two to four times a year, which kept the members informed on events of the time and also placed historical material at their disposal.

The first half of the third quarter-century was again extremely unsettled. World War II and the currency reform struck wounds again. The minister was called to military service, leaving the congregation to look after itself once more. Connections with the outside remained lively. As representative of the Mennonite Central Committee, M. C. Lehman arrived in 1939; from South Russia some young Mennonite women came to Berlin in 1942; from Holland several Mennonite students came in 1943 to work in the factories. The congregation took an interest in them to the extent of its abilities. The losses on the battlefield and through air attacks within the city mounted. The aged and children were evacuated; men capable of military service were called to the colors. With difficulty the work of the church was carried forward. The chairman of the board (Crous) was transferred to Göttingen in 1944 and was able to come to Berlin only every alternate month; the assistant chairman, Heinrich van Dühren, fell in 1945 in the defense of Berlin. The congregation was threatened with disintegration. Erich Schultz, member of the board beginning 1944, chairman beginning 1946, elder beginning 1949, collected the congregation and gathered in the refugees from the East Zone. The congregation grew to twice its peacetime membership, reaching nearly 1,000 in 1950; several persons from other creeds joined. The congregation opened its own branch of relief work, and instruction and care of the youth again was instituted. After 1947 baptismal and communion services were held annually, with numerous guests from the East Zone, by Elder Crous.

Beginning December 1946 the Mennonite Central Committee (MCC) had a representative in Berlin, and carried on a program of relief and refugee aid, in co-operation with the Berlin congregation. Ringstrasse 107 was the headquarters and refugee aid center, and it was from here in January 1947 that the notable exodus of over 1,000 Russian Mennonite refugees to Paraguay took place. From here also a package distribution to East Zone Mennonite refugees from Russia and the Danzig area was carried on. Berlin became an important reception and transit point for refugees fleeing from the East en route to Western Germany and overseas. In late 1949 an MCC Nachbarschaftsheim was established in the Kreuzberg area at Urbanstrasse 21, which was transferred to Berlin-Lichterfelde-Ost, Promenadenstrasse 15b, in the spring of 1952, when the Ringstrasse center was closed. The new center, later called Mennoheim, also served the Mennonite Central Committee as its refugee aid center, as well as the Berlin congregation as an activity center. The headquarters of CRALOG (Council of Relief Agencies Licensed for Operation in Germany), the channel by which MCC relief supplies were forwarded to Germany, was established in Berlin in March 1946 and continued there until removed to Bremen in the winter of 1950-1951. The Mennonite Central Committee representative on CRALOG headquarters staff was located in Berlin from the fall of 1946 to the fall of 1947. The continuous presence of the MCC staff in Berlin beginning the fall of 1946, and the uninterrupted operation of MCC relief, refugee, and neighborhood center work, was of considerable benefit to the Berlin congregation as an outpost of Mennonitism in the East as well as upon the Mennonites continuing to reside in the East Zone. -- Ernst Crous