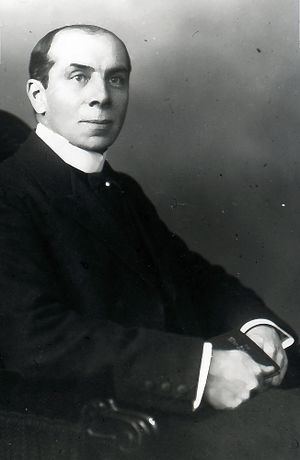 Jacob Kroeker, a leading Mennonite theologian and writer, born 31 October 1872 in Gnadental, Molotschna, in South Russia, died 12 December 1948 near Stuttgart, Germany. After passing the state examination he spent two years as a teacher at a Mennonite school at Menlarstchick, near Spat (Crimea). He was married to Anna Langemann on 18 July 1894. Then he spent four years at the Baptist theological seminary at Hamburg, and upon his return to Russia was ordained preacher and elder by David Schellenberg, 18 August 1898. He and David Dürksen served as traveling evangelists. In 1906 Kroeker settled at Halbstadt; with Abraham Kroeker he published Die Friedensstimme, the first Mennonite church paper in Russia, and a widely used Christlicher Abreisskalender. He was also one of the founders of Raduga, the first Mennonite publishing concern, and the deaconess home in Halbstadt.

About that time he was deeply impressed by the revivalist Dr. Baedeker and through him made contacts with the flourishing evangelical circles in St. Petersburg, which extended into the circles of the nobility, and with the Alliance movement in Germany and the Baltic states. He attended the Alliance Conference at Blankenburg almost every year, and was a member of its committee. In addition he worked with great success at Bible conferences in Russia, an activity he continued even after he moved to Wernigerode a.H., Germany, in July 1910. This extensive service was interrupted by the first World War.

Now Kroeker devoted himself to theological study, particularly of the Old Testament; the mature fruit of this study is the series Das lebendige Wort, planned to comprise 14 volumes of 400 pages each, eight of which had appeared in 1934. Other smaller works by Kroeker have been published: Allein mit dem Meister; Der verborgene Umgang mit Gott; Gottes Segensträger; Licht von seinem Lichte; Verhüllte Segenswege des Glaubens; Weltstaat und Gottesreich; Vom Heimweh der Seele; and Er sprach zu mir. His Römerbrief-Kommentar Kapitel I-8, Ein Handkommentar, was published after his death in 1949. Some books went through numerous editions.

In collaboration with Pastor Jack he served Russian prisoners of war in camps through the distribution of Bibles and preaching, and called the missionary society Licht im Osten into being in 1918, which for years educated Russian preachers at a seminary in Wernigerode, gave relief to the needy in Russia, published a missionary paper, Dein Reich komme, and conducted an annual conference (Glaubenskonferenz). In addition Kroeker was a speaker at many Bible conferences and recognized as a theologian by leaders of the German, Swiss, and Dutch, Lutheran, Reformed, and free churches. He exerted lasting influence upon the Mennonites of Germany, Switzerland, and North America by his lecture tours.

During World War II the Kroekers celebrated their golden wedding anniversary. After the German collapse they had to leave Wernigerode because it was in the Russian zone. The aging couple and ailing husband found a home near Stuttgart, where he died in 1948. Some of the children meanwhile immigrated to Canada, while Mrs. Kroeker and some of the children remained in Germany.