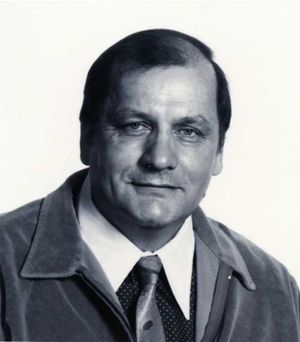 George Edward Richert: university professor, administrator and advocate for peace and justice, was born 27 January 1936 in Waldheim, Saskatchewan, Canada to Abram Richert (22 February 1896-26 December 1984) and Mathilda “Hilda” Schultz Richert (15 August 1896-19 June 1969); he was the youngest of one daughter and three sons. Abram Richert was a teacher in a local school; this may have influenced George’s vocational choices. On 27 June 1957 he married Pearl Kathleen Janzen (5 January 1934- ), daughter of Isaac Leonard Janzen (23 August 1893-11 November 1970) and Nettie Mae Dirks Janzen (3 July 1907-25 June 2001); together George and Pearl had two sons, Colin and Dean.

Although he began his teaching career in the 1950s in a one-room school in Saskatchewan, George Richert went on to major roles at two universities. He served at the University of Regina as a professor, and later Dean of Education, for 11 years, and taught internationally in Nigeria for several years. He was then President of Menno Simons College, affiliated with the University of Winnipeg, from 1992-2001, leading the college during a decade of significant growth, and directing it as it became a central part of the newly formed Canadian Mennonite University in 1999.

He was also active within his denomination, serving as assistant moderator of the Conference of Mennonites in Canada from 1987-1993.

In addition, with his unwavering commitment to fostering peace and justice, George lived, worked and provided consulting services in a variety of countries around the world. In the 1970s he chaired the Ghanaian Task Force which was developed for teacher educators in Ghana. In the 1980s he did consulting on the Indonesia Teacher Education Project. In the 1990s he focused on China and Iraq, and travelled to Iraq with medical supplies in 1999 in connection with his MCC duties.

George also gave leadership to many educational councils throughout his career, that involved connections across education organizations and government agencies. This included roles such as Special Advisor to the federal Minister of Indian Affairs and Northern Development on Self-Government of First Nations peoples.

George Richert was a big man who loved golfing, wore big shoes, and freely shared his generous heart and hearty laugh while making significant contributions to Mennonite post-secondary education and to the improvement of education around the world.