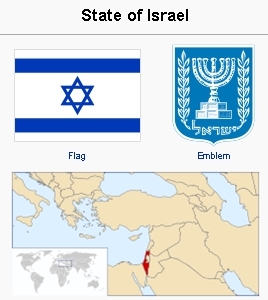 Israel is located on the eastern edge of the Mediterranean Sea, with Lebanon to the north, Syria northeast, Jordan in the east, and Egypt on the southwest. The West Bank and Gaza Strip are also adjacent. With a population of about 7.28 million, the majority of whom are Jews, Israel is the world's only Jewish state. It is also home to Arabs, Muslims, Christians, Druze, and Samaritans, as well as other religious and ethnic minority groups. Israel has two official languages, Hebrew and Arabic.

Israel was established as a homeland for the Jewish people and is often referred to as the Jewish state. All Jews and those of Jewish lineage have the right to Israeli citizenship. Just over 75% of the population are Jews from a diversity of Jewish backgrounds. Approximately 68% of Israeli Jews are Israeli-born, 22% are immigrants from Europe and the Americas, and 10% are immigrants from Asia and Africa (including the Arab World). The religious affiliation of Israeli Jews varies widely: 55% say they are "traditional," while 20% consider themselves "secular Jews," 17% define themselves as "Orthodox Jews"; the final 8% define themselves as "Haredi Jews."

Mennonites have been serving in Israel since the early 1950s. The Mennonite Board of Missions (Mennonite Church) sent the first workers to the young state in 1953, complementing the presence of Mennonite Central Committee (MCC) personnel already beginning to work in the West Bank of Jordan. The early relief work of MCC among Palestinian refugees gradually evolved in the direction of self-help and development projects as well as peace education and advocacy work. With headquarters in East Jerusalem, MCC has also been involved in education. Hope Secondary School in Beit Jala is still partially supported by MCC as is Bethlehem Bible College, (1979- ). Mennonite Board of Missions workers in Israel proper, scattered around the country and not exceeding five families, have served in a variety of contexts including the Nazareth Hospital, the United Christian Council in Israel, Sharon Tours, university student ministries, and Immanuel House, a congregation in Tel Aviv for Messianic Jews. The mission stance of Mennonites in Israel has been to be supportive of local expressions of the church rather than establish Mennonite churches.

Since 1967 when the Six Days War brought the West Bank under Israeli control, Mennonites in both Israel and the West Bank have enjoyed fellowship and mutual support. Joint retreats are held periodically and information is shared. Aware that the Mennonite constituencies in North America represent a variety of viewpoints on the theological significance of modern Israel, Mennonite workers seek to be sensitive to the painful historical experience of both Jews and Palestinian Arabs. Dispensationalism, which views modern Israel as the fulfillment of prophecy, and the church as God's interim arrangement, has gained some support among Mennonites. However, such a perspective, if understood at all, is looked upon with suspicion by both Jews and Arabs and is neither appropriate nor helpful. Rather, Anabaptist insights into the radical newness of the believers church, the importance of reconciliation, and the loving response to human need should address the tensions and problems of the Middle East. Thus, while continuing to relate to needs within their respective spheres of service among Israelis and Palestinians, Mennonites are attempting to present the case for peaceful resolution of the conflict and the claims of Jesus as Messiah and Lord.