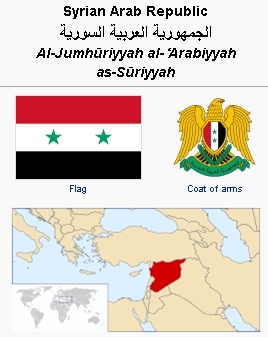 Syria, including Lebanon, which is now a separate political unit, is a land of historic importance on the eastern coast of the Mediterranean Sea. Damascus, its ancient capital, and Antioch were centers for the beginning and spread of Gentile Christianity. Judaism, Christianity, and Mohammedanism have been the three predominant religions. In modern times both Roman Catholicism and Protestantism have been active in missionary attempts to revive the old churches. Mennonites have been related to this area through the work of the United Orphanage and Mission, which was begun in 1898 by the Mennonite Brethren in Christ (MBC) among Armenians at Hadjin, Turkey, and Near East Relief. During World War I missionaries were forced to leave Turkey; thousands of Armenians lost their lives, while the remainder fled or were deported. Refugee camps were set up in Damascus, Aleppo, and Beirut, from which Armenians were gradually settled in the cities of Syria. To serve these people the United Orphanage and Mission Society returned missionaries for work in Syria. A staff of four to six was maintained in 1923-1938; World War II again stopped operations. During this period relief and missionary work was carried on in association with the Spiritual Brotherhood, a group of Armenian Christians under the leadership of Abraham Sefarian. Churches were started in six cities, Alexandretta, Damascus, Kirik Khan, Latakie, Aleppo, and Beirut, with a membership eventually of one thousand. On the departure of the missionaries in 1938 the churches continued independent work. In 1957 the United Missionary Church (formerly MBC) again sent three missionaries to assist in the indigenous work being carried on by Samuel Doctorian in Beirut.

In 1919-1921, the Mennonite Relief Commission for War Sufferers (Mennonite Church) co-operated with the Near East Relief, which had been organized in November 1915, in relief work in Syria, with workers serving at Beirut, Aleppo, Mardin, and other places. (See Relief Work.)

In 1957 Menno Travel Service opened a Near East office at Beirut, Lebanon.