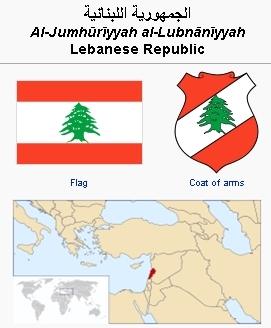 The Republic of Lebanon is located in Western Asia on the eastern shore of the Mediterranean Sea. It is bordered by Syria to the north and east, and Israel to the south.In 2007 the estimated population of the country was 4,099,000. In terms of religious affiliation the population can be divided into the following groups: Muslim - 59.7% (Shi'a, Sunni, Druze, Isma'ilite, Alawite or Nusayri), Christian - 39% (Maronite Catholic, Greek Orthodox, Melkite Catholic, Armenian Orthodox, Syriac Catholic, Armenian Catholic, Syriac Orthodox, Roman Catholic, Chaldean, Assyrian, Coptic, Protestant), and 1.3% other.

Mennonite Central Committee (MCC) assisted Armenian refugees in the 1920s and World War II victims in 1948-1949. From 1958 to 1962 MCC opened and maintained a Menno Travel Service office, and then returned in 1976 following the outbreak of civil war to aid the victims of the Lebanese conflict in cooperation with the Middle East Council of Churches. Rural development and emergency assistance in South Lebanon was the focus in those years, with MCC volunteers living in Sidon and Nabatiyeh. MCC personnel were frequently in very serious physical danger. After the June 1982 Israeli invasion MCC also assisted Palestinians in the Tyre and Sidon camps. In 1987 MCC directors located in Jordan, a nurse resident in Lebanon, and several Lebanese staff workers in Lebanon carried out the work of rural development and health and vocational training.

MCC also provided humanitarian assistance in Lebanon during the the 2006 Lebanon War. MCC worked closely with the Development for People and Nature Association (DPNA), an organization that supports children, adolescents, youth, women and people with special needs. With assistance from MCC and other agencies DPNA was able to distribute food, milk, diapers, mattresses, cleaning supplies and practical assistance, such as wheelchairs, canes and hearing equipment, for people with special needs.

MCC supports Muslim-Christian dialogue through the Middle East Council of Churches and the Imam Sadr Foundation, and supports workshops on peacemaking and conflict resolution in universities and other institutions. It also distributes school supplies to organizations that work with homeless children, refugees and orphans. In 2008 MCC worked in refugee assistance with churches of the Sudanese refugee community in Beirut and a vocational school for Palestinian refugees in Sidon.