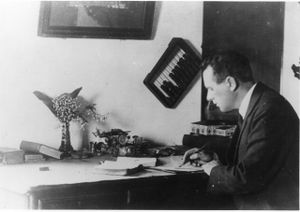 Jacob H. Pätkau (1895-ca 1947), a prominent Mennonite elder in the Memrik settlement, South Russia, was born in Nikolaipol, Borrissovo settlement, on 1 April 1895, the son of the miller and preacher Heinrich Pätkau. One of his younger brothers was David H. Paetkau. After graduation from the Chortitza Normal School (Lehrerseminar) in 1914 he began teaching in the village school at Schönhorst, Chortitza settlement, but was drafted into alternative service (medical corps) in 1915-1917, and resumed teaching in Karpovka, Memrik, in 1917-1922, making a brilliant record as an educational leader for the entire settlement. He was ordained preacher in early 1921 by the Kalinovo congregation, and within six months as elder, serving as overseer over the church in 10 villages and beyond. At the request of his church he remained at his post when he could have immigrated to Canada. He was elected a member of the Kommission für Kirchenangelegenheiten (KfK) in January 1925. In the autumn of 1929 he went to Moscow to help those fleeing from Russia, but was arrested and returned to his home. He then fled with his family to the Caucasus, where he continued to serve the church. But he was in constant danger and fled from place to place. He was finally caught in 1937-38, arrested, and sent to Siberia. He was still living in 1945 but dead by 1947. His widow was still living in 1949, working in a children's home.