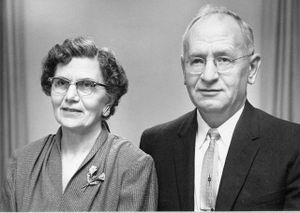 David was baptized in May 1920 in Memrik, trained as a teacher in Ekaterinoslav in 1920 and in 1926 immigrated to Canada with his mother and four siblings. He married Helene Unger in 1927 in Ontario and then moved to Rosthern, Saskatchewan, where he trained as a teacher in the Rosthern German-English Academy and the Normal School in Saskatoon. He spent several years teaching in a rural school near Rosthern before he joined the teaching staff of the German-English Academy in 1935, where he worked until 1951. There he introduced systematic instruction in music and established a concert choir, the Mendolssohn Choir, that became a model for good choral singing in Saskatchewan and Alberta. Paetkau participated actively in the musical life of the Rosenorter Church, serving as a frequent choral workshop leader.

Paetkau published two volumes of Liederalbum (1945, 1947), a collection of choral music that provided a source of choral music for prairie choirs as long as they retained a German repertoire. It was reprinted three times, the last reprinting sponsored by the British Columbia Mennonite Youth Organization. He was a member of the committee that produced the Gesangbuch der Mennoniten (1942) for the General Conference Mennonite Church. Paetkau and his wife lived in Coaldale, Alberta from 1954 to 1964, and then retired to Richmond, British Columbia.

Berg, Wesley. From Russia With Music: A Study of the Mennonite Choral Singing Tradition in Canada. Winnipeg, Manitoba: Hyperion Press, 1985.

Klassen, Irene and others. Their Mark, Their Legacy. Calgary, Alberta: Mennonite Historical Society of Alberta, 2006.