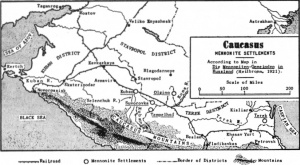 Caucasus, formerly a part of Russia (now part of Georgia, Armenia, and Azerbaijan) between the Black and Caspian seas, area 154,250 sq. mi., pop. (1950) 14,410,000, predominantly mountain people of Turkish and Tatar origin. Caucasus was incorporated into Russia in 1861.

North Caucasus became the site of several Mennonite colonies. The original settlements in Caucasus fell in the period of strong separatist movements and ensuing religious divisions within the Mennonite circles of the mother colonies in the Ukraine. In the early years "from the base in South Russia proceed only the religiously and morally motivated secessions into Caucasus" (A. Ehrt, 80): the Templars, a rationalistic wing, to the Tempelhof near Pyatigorsk, and the newly emerging Mennonite Brethren with pietistic tendencies to Kuban. In later years sociological reasons predominated, the settlement at the Terek arising because of the overpopulation of the mother colony of Molotschna.

The second settlement, consisting of two villages —Tempelhof and Orbelianovka—was established in 1866 on 27,000 acres of land in the province of Stavropol and had a population of 700 after World War I. The population of Tempelhof consisted of Friends of Jerusalem Jerusalemsfreunde), who had come from the Molotschna settlement; the inhabitants of Orbelianovka were non-Mennonites who had joined the settlement, and the Alexandrodar Mennonite Church of the Friends of Jerusalem (see also Johann Lange).

The Suvorovka settlement was located in the province of Stavropol in the district of Alexandrovsk and was established by Mennonites from Zagradovka in 1894. It consisted of four villages on 10,000 acres of land with a population of 1,000 after World War I.

The Olgino settlement, located in the province of Stavropol, was established in 1895 and consisted of 4 villages with an area of 12,000 acres. After World War I the population was 1,000, and belonged to the Olgino Mennonite Church of Friends of Jerusalem.

The available land in the various settlements was adequate. With the exception of Terek, all the colonies developed normally, and became in part model farms and colonies. The original difficulties were very real. The settlers had come into a region that was very different from their homeland in climate, in topography, and in ethnic characteristics. The neighboring Tatars, Circassians, etc., still held to primitive methods of agriculture; there was no one to give advice, and they had to learn by experiment. Various futile attempts consumed time and money, such as cheese making, silkworm culture, and vineyards, until they concentrated on cattle raising and fruit growing, which were eminently successful. In Olgino, where agriculture was the principal occupation, Mennonite methods were also successful and served as models to the surrounding Russian villages. Factories, mills, cooperatives, and other industries soon did a thriving business as well.

The Mennonites of North Caucasus were peacemakers and pioneers all along the line; their work was repeatedly recognized and rewarded by the czarist government. Their mental alertness was expressed in the excellent development of churches, schools, and organizations, setting them apart not only from the native population, but also from other Mennonite groups. Only World War I and the Revolution disrupted their progress, and the communist way of life and World War II destroyed their settlements and achievements.

The Terek settlement, the farthest east of all, was the first to disappear as a result of the troubles following the war and the Revolution. Repeated robberies and even murders at the hands of their non-Russian neighbors led to an evacuation of the entire settlement in February 1918 to other parts of Caucasus. The return of a part of the colonists in the spring of 1921 was a mistake, for in 1923 conditions again became so bad that families began to leave, and in May 1925 the settlement was finally completely evacuated. Most of the Terek colonists reached Canada in the 1922-1925 migration.

The remaining Mennonites of Caucasus were mostly exiled during the Soviet era and the last were evacuated to Asiatic Russia when the Germans invaded Russia in 1941. Very few reached Canada and South America after World War II.