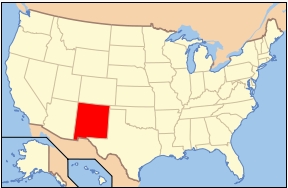 New Mexico, admitted to the union in 1912 as the 47th state of the United States of America, is located in the southwest/western region of the United States and is generally considered one of the "Mountain States." Of the 50 United States, New Mexico is the 5th most extensive (121,598 sq. mi./314,939 sq. km.), 36th most populous (est. 2,082,224 – July 2011), and 6th least densely populated (17.2 per sq. mi./6.62 per sq. km.). New Mexico is nicknamed the "Land of Enchantment," in part because its landscape ranges from wide, rose-colored deserts to broken mesas to high, snow-capped peaks. New Mexico is bordered by the state of Colorado on the north, the state of Arizona on the west, the state of Texas and the Mexican states of Sonora and Chihuahua on the south, and the states of Oklahoma and Texas on the east. The four states of New Mexico, Colorado, Arizona, and Utah meet at one common point known as the Four Corners, which is known as the heart of the American Southwest.

Inhabited by Indigenous peoples of the Americas for many centuries, New Mexico has also been part of the Imperial Spanish viceroyalty of New Spain, part of Mexico, and a U.S. territory. Diverse cultures – Indian, Spanish, and Mexican – have shaped New Mexico. Most New Mexicans, nearly half of whom are Hispanic/Latino, live along the Rio Grande River, many in Albuquerque, the state’s largest city. Income from copper and potash supplements earnings from crude oil and natural gas. The boom in weapons and energy-related research brought scientists to Los Alamos and Sandia National Laboratories beginning in World War II. Santa Fe, the state’s capital and seat of government since ca. 1610 when it was a dusty Spanish outpost, continues to attract artists, writers, and tourists.

According to the 2010 U.S. Census, New Mexico’s racial and ethnic composition was: 68.4% White (40.5% Non-Hispanic White); 2.1% Black or African American; 9.4% American Indian and Alaska Native; 1.4% Asian; 0.1% Native Hawaiian and other Pacific Islander; 3.7% from two or more races. Of the state’s total population, 46.3% was of Hispanic or Latino origin (of any race) – the highest percentage of Hispanics among U.S. states, including descendants of Spanish colonists and recent immigrants from Latin America. Among U.S. states, New Mexico has the second-highest percentage of Indigenous peoples, after Alaska, and the fourth-highest total number of Indigenous peoples after California, Oklahoma, and Arizona. The tribes in the state consist primarily of Navajo and Pueblo peoples. As a result, the demographics and culture of the state are unique for their strong Hispanic and Native-American influences. According to the 2000 United States Census, the most commonly claimed ancestry groups in New Mexico were:  Spanish (18.7%), Mexican (16.3%), American Indian (10.3%), and German (9.8%).

In 1908 small Mennonite settlements were established in northern/northeastern New Mexico at Nolan, located on the Atchison, Topeka, and Santa Fe Railroad 11 miles north of Wagon Mound, and Miami, some 13 miles northwest of Nolan. Although it is uncertain whether Mennonite churches were formally established in these settlements, fledgling groups of Mennonites held sporadic church meetings at these locations during 1909-10 led by ministers from La Junta, Colorado.

During 1921-25 land agents were successful in inducing eleven Old Order Amish families from Reno County, Kansas, to move to northeastern New Mexico. The families lived in the southeastern part of Colfax County some 26 miles (42 km.) east of Springer and 6 miles (10 km.) north of US Highway 56. A church was established with Abe Nissley as minister. Some of the families lived farther east, just across the line in Union County. While profitable crops were raised in 1921, subsequent years of severe drought resulted in the settlement’s demise with most of the Amish returning to Kansas while some went to Custer County, Oklahoma. One of the Amish families, the D. Y. and Susan Bontragers, remained until 1929, raising diversified crops such as pinto beans and onions and manufacturing adobe building blocks.

In 1931 Mennonite worship services were held once a month at Abbott, a small town in northeastern New Mexico some 40 miles south of Raton. That year the Mennonite Yearbook listed the congregation but gave no membership statistics. By 1937 the congregation was dropped from listings in the yearbook.

In 1944 the Church of God in Christ, Mennonite (Holdeman) organized a Spanish mission in Trementina, a rural area in San Miguel County. The mission closed during the early 1950s when its members moved to Tucumcari, some 65 miles south/southeast in Quay County. In 1959 the Tucumcari Spanish Mission had 27 members. Later during the 1980s, a Church of God in Christ, Mennonite Christian Service program in Albuquerque led to establishment of a congregation.

During the late 1980s a Voluntary Service (VS) unit, known as the Albuquerque Service Adventure, was established in association with the Albuquerque Mennonite Church to support congregational development. In 1990 Ken and Leona Gingerich of Hesston, Kansas were called to serve as half-time lay leaders of the struggling congregation, and in 1992 Ken was appointed by the Mennonite Board of Missions as Albuquerque Urban Ministries Director to help raise the visibility of evangelism and church development projects throughout the metropolitan area. In 1998 the Albuquerque Mennonite Church initiated sponsorship of a new and revitalized Service Adventure Unit.

A Conservative Mennonite Conference church planting ministry was also started in Albuquerque during the 1980s resulting in the formation of two congregations.

In 1966 (operated until 1985) a Voluntary Service unit was established in Carlsbad, a hub for potash mining, petroleum production, and tourism in southeastern New Mexico, and with the help of the Mennonite Board of Missions the Carlsbad Mennonite Church was formally organized as a Rocky Mountain Mennonite Conference congregation the following year. From 1979 to 1984 Raymundo Gomez from Archbold, Ohio, served as pastor of Iglesia Evangelica Mennonite, a church planting effort among Hispanics that was sponsored by the Carlsbad congregation with the aid of the Mennonite Board of Missions and the Rocky Mountain Mennonite Conference. In 1986-88 Paul Stoltzfus, with support from the Carlsbad congregation, conducted an outreach ministry in Artesia, some 35 miles to the north.

A Mennonite Voluntary Service unit was also established in Grants, and Voluntary Service workers shared in Navajo mission programs in the Bloomfield area near Farmington in northwestern New Mexico from 1950 through the 1970s.

During 1996-99 the Family of Faith Mennonite Church was organized in Rio Rancho, an Albuquerque suburb, around a cell congregational model for community outreach and worship as a partnership effort of the Rocky Mountain Mennonite Conference, Mennonite Board of Missions, and General Conference Mennonite Church. Thereafter, the congregation dissolved, and its members joined other Mennonite and non-Mennonite churches in the area.

On 19 October 2009, the Mennonite Weekly Review reported that New Mexico ranked 41st among the 50 states in the United States in terms of Mennonite population with 10 churches and 418 members.

A survey conducted in 2010 by the Association of Statisticians of American Religious Bodies reported the following data for Colorado Anabaptist/Mennonite groups (adherents included members, children, and others who regularly attended):

The Cross Christian Community Church (Navajo) in Shiprock, New Mexico, was affiliated with the Anabaptist Native Fellowship of Churches in 2012.