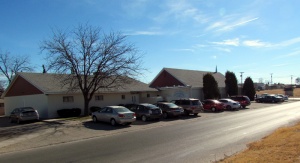 After several Mennonite families moved from Maryland and Pennsylvania to the Carlsbad area in southeast New Mexico in 1964 for employment and health purposes, they envisioned establishing a Mennonite church for spiritual nurture and outreach. In 1966 the Paul Stoltzfus family moved to Carlsbad to provide pastoral leadership for the small group of Mennonites who began to meet for worship in a rented Seventh Day Adventist Church building on 4 September of that year.

A Mennonite Voluntary Service unit was established at Carlsbad in 1966, and a house at 911 W. Greene Street was purchased. In October the first unit leaders, Abe and Glenda Moyer arrived from Buckeye, Arizona, where they had served in a previous VS assignment. Several days later, the first Voluntary Service worker, Gene Miller, arrived from Pryor, Oklahoma, and began working as an orderly at St. Francis Hospital. During the next 19 years until the unit closed in July 1985 VS unit members actively supported the work of the congregation and engaged in a variety of community outreach services.

With the help of the Mennonite Board of Missions the group formally organized the Carlsbad Mennonite Church on 6 March 1967, with 18 charter members, and Stoltzfus was installed as pastor. In 1968 the congregation, with Rocky Mountain Mennonite Conference financial aid, purchased a six-year-old former Baptist church building and repainted it. As an outreach effort to the community, the church conducted its first Summer Bible School in cooperation with a local Spanish Assembly of God Church. The well-attended school had an average attendance of 75.

On 1 June 1971, Jerry Westcott began pastoral service with the congregation, and he was installed on 8 August. After Westcott resigned during the summer of 1974, Peter Hartman was licensed and installed as pastor of the church on 16 September 1975. Hartman, who served as the congregation's pastor for nearly 17 years until his resignation in May 1992, was ordained on 14 November 1976. The church became self-supporting in 1976, the same year in which the church building was remodeled. By 1978 the church had a membership of 39. In June 1979 Raymundo Gomez from Archbold, Ohio, began a five-year term as pastor of the Iglesia Evangelica Mennonite, a church planting effort among Hispanics that was sponsored by the congregation with the aid of the Mennonite Board of Missions and the Rocky Mountain Mennonite Conference. The Hispanic congregation utilized the church's facilities for services until 1984 when the outreach effort was officially ended and another building became available for the group to use as an independent organization. An addition to the church building, consisting of a fellowship hall and Sunday school rooms, was dedicated in March 1983. By 1985 the church's membership was 80 and its average attendance ranged between the 80s and 90s. In 1986 Paul Stoltzfus, with support from the congregation, conducted a two-year outreach ministry in Artesia, some 35 miles to the north of Carlsbad.

During the 19-year tenure of the Mennonite Voluntary Service unit in Carlsbad, workers continued to serve at the hospital and other medical facilities as orderlies, nurse aides, surgical technicians, licensed practical nurses, and registered nurses. From the start, however, the VSers were also active participants in the work of the Carlsbad Mennonite Church. During the 1970s and early 1980s the VSers served in various community and social programs, including: Community Action Program; Treasure House for the emotionally handicapped; Head Start preschool program; Cerebral Palsy Center; Busy Bee Workshop for retarded children; city Boys' Club and the Red Cross office; Craft School special education classes; and Child Development Center. Early in 1980 the unit opened its home to lodge runaway teens referred by the Shelter Bed Program, and in 1982 the unit's house was remodeled with Rocky Mountain Mennonite Conference funds into a housing facility to accommodate transients or other persons in need of temporary housing. Between October 1982 and April 1985 the Crisis Shelter, as it came to be called, sheltered 109 persons. Between October 1966 and July 1985, when it closed, 126 workers from 22 states and one Canadian province served in the Carlsbad Voluntary Service unit.

In 2007 Carlsbad Mennonite Church, under the pastoral leadership of Meg Lumsdaine, had an average attendance of 35.

In 2009 Ron and Betty Collins of Goshen, Indiana, began providing interim pastoral leadership for the congregation. The congregation cooperated with other area churches in various outreach ministries, including transitional housing, soup kitchens, Habitat for Humanity, CARC Farm, and nursing homes.